It’s a nuanced story with no shortage of humor, verbal jabs, racial tension and ambiguous characters 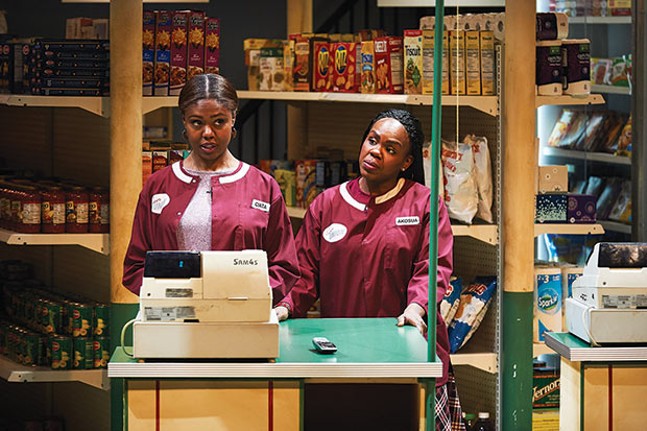 It’s not uncommon for people working in close quarters, for long hours and under stressful circumstances, to forge strong bonds, friendships, romances and even a surrogate sense of family. And there’s no shortage of workplace dramas in film, television, theater and literature to remind us of that phenomenon.

While some of those stories can veer into hokey sensationalism, the best of them allow the connections to form organically, in small moments accumulating over time. That slow-burning approach to the genre is the key to Citizens Market, an unconventional workplace drama staged at City Theatre through March 25.

The workplace in this instance is, well, a market on 119th Street in New York City called the Super Union. The set, by Tony Ferrieri, creates a stunningly realistic interior replete with aisles of dry foods, an upstairs office, and fruit you’ll want to eat off the rack.

The other half of the play’s title is a nod to the sense of community the shop provides, and the anxiety over the legal statuses of the people who work there. Each of the shop’s employees is an immigrant, though the “legality” of each is unclear and the threat of deportation hangs over the ensemble throughout.

The characters come from all over the world — Ghana, Ireland, Sierra Leone, Romania — but they’re all united in the belief that with enough hard work in their new country, they’ll be able to build better lives for themselves.

The market’s manager, Jesus (Juan Francisco Villa), dreams of saving up enough to buy the Super Union from its owners; Akosua (Ngozi Anyanwu) has a newfound confidence after receiving her green card and plans to go to school; and Ciara (Shamika Cotton) selflessly works so she can provide for her family back in Sierra Leone. Their problems are unique, but the script, by Cori Thomas, succeeds by focusing on the sympathy the characters have for each another; they’re all essentially dealing with the same issue: how to build a new life in a strange land.

This approach could easily devolve into a hundred minutes of hugs and handholding, but that’s not what Market delivers. Instead, it’s a nuanced story with no shortage of humor, verbal jabs, racial tension and ambiguous characters.

Thomas writes in the program notes that she hopes the audience will leave the show “realizing that an America where everyone is not welcome to try to work and live alongside those already here, is not America.” She has succeeded.