For Edward Snowden completists, Laura Poitras' doc puts the viewer in the Hong Kong hotel room for the big reveal

Condensed, the story of Edward Snowden and his trove of top-secret NSA documents has plenty of potboiler elements: exotic locales, international journalists, code names and secret signals transmitted via Rubik's Cube. All true, but Laura Poitras' documentary Citizenfour adopts a more serious, and one might say, less exciting, fly-on-the-wall approach.

Filmmaker Poitras was among those Snowden (a.k.a. "citizenfour") originally contacted, and it's she and journalist Glenn Greenwald who meet up with Snowden in Hong Kong to look at the documents and lay out a strategy for publicizing them. This comprises the bulk of the film.

The more interesting segments involve Snowden discussing the hows and whys of his high-risk behavior. He's keenly aware of the consequences — "I already know how this will end for me" — and later is explicit about his public role: "I don't want to hide on this. It's powerful to come out and say I'm not afraid." 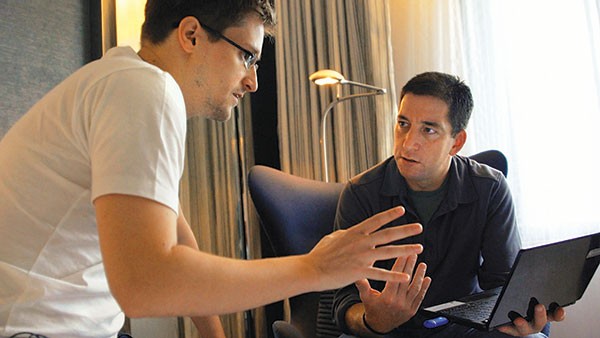 Edward Snowden and Glenn Greenwald prep for the big reveal

One of the films' better points winds up being buried in asides and the odds and ends of other material Poitras mixes in, from Occupy to quick visits to newsrooms: that, as Snowden feared, the story quickly became about him, and not about what troubling information the documents revealed. And indeed, we now still wonder more about how Snowden is faring in Russia, than what the government is doing with it secret data collection. An irony unsolved by either Snowden's brazen act, or this film's recap of that week in a Hong Kong hotel room.