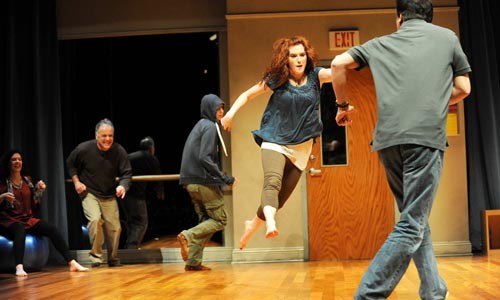 As someone who spent a large part of his life held hostage by the neurotic whims of actors, I found it impossible not to laugh during Pittsburgh Public Theater's production of Annie Baker's Circle Mirror Transformation.

It's set in a small-town dance studio given over, once a week, to a Beginners Acting class run by an "earth mother" named Marty. Her students include: her husband, James; Lauren, a talent-free teen-ager; a man named Schultz, still grieving his failed marriage; and Theresa, an emotionally extravagant failed actress.

The class runs six weeks, and using numerous black-outs we glimpse highlights from each week. Baker rejects any bridging dialogue between these scenes: Once the beat is played out, the lights go down and come up before the next emotional moment unfolds. There's no filler or unnecessary chatter; it's a script for the Twitter generation.

Which is to the good. Baker isn't presenting much that is new, so I do really appreciate her not trying to stretch things out. The great thing about Baker's writing is that she never wants the show to be anything other than it is: This is a small play about gentle people living painfully lonely lives. There's not much in the way of plot, just five lives being lived.

And what with the theater angle and all the jokes about how pathetically needy actors are, I couldn't help but laugh. Jesse Berger works hard to keep his solid direction hidden; much of the evening appears to be happening by itself, and that's any director's neatest trick.

These are challenging roles. It's essential no one look like they're acting a character; everybody must seem completely natural. And yet a couple of the characters are (wanna-be) actors, so they need to be unnatural to be real. A lesser cast couldn't have done it this well. Lauren Blumenfield, Bridget Connors, Daina Michelle Griffith, Daniel Krell and John Shepard get a great big hand for making it as natural as breathing. And I do want to mention David M. Barber's terrific set and costumes, which provide the perfect look for this sweet and funny show.