Time was, fine dining in Pittsburgh meant a candle-lit, softly carpeted, white-tablecloth restaurant, located either in a plush hotel or atop Mount Washington, which served conservative Continental fare. What seemed sophisticated then seems almost retro now. Contemporary trends in fine dining are a lot less buttoned-up. They lean toward a clubby, casual ambience, gussied-up kid food like macaroni and cheese and unexpected, even edgy, locations.

Which brings us to the phenomenon of the restaurant in the parking garage. We're not talking coffee-and-sandwich shop, either; we're talking about the kind of place that you might take a date or an out-of-town client to show off your -- and Pittsburgh's -- urbanity.

Such a place is Cioppino Seafood Chophouse Bar, named in honor of the iconic fish stew invented by Italian immigrants in San Francisco, and it sits in the Strip District parking structure built for the Cork Factory Lofts. This is not just any parking garage, of course. It represents rebirth at its most miraculous and magnificent: that of the formerly derelict Armstrong Cork factory as hip and happening lofts. Between the hulking brick buildings and Smallman Street, the project has also transformed a former vacant parcel into a parking structure with built-in storefronts, a spiffy alternative to the drab surface lots that blight so much of our city.

Cioppino is actually a complex, including a small market, a cigar bar and the restaurant. Inside the latter, the space is scaled large, and the décor responds in kind, with big light fixtures, big vases, big tables and a smattering of oversized artwork, including a photo of the Cork Factory in all its once-graffitied glory. The main color is gray, but the effect is neither dull nor industrial, largely thanks to artful, mellow lighting.

Sophisticated menus have graduated from the showy, ingredient-of-the-month school of the past decade to a more sedate, carefully considered approach that results in more reliably enjoyable meals. Cioppino exemplifies this with its "approachable Tuscan-inspired American cuisine," which translates to a menu that is mostly Italian, with chophouse options in the modern American spirit of well-sourced, seasonal ingredients. Chef Gregory Alauzen, previously of much-lauded Steelhouse Grill and Eleven, lays out his dishes in detail, and it's easy to see how, say, rapini and garlic, smoked bacon and roasted-pepper pesto will work, even if you've never had them together before.

One thing we'd never heard of before was "conserved pork." Served in a small crock, this turned out to be finely shredded meat reminiscent of pulled pork without the sauce: moist, savory and simply but intensely flavored. We piled it onto perfectly crisp crostini and declared its one flaw to be too much salt.

Fried calamari is an appetizer so ubiquitous, we only order it if a kitchen seems to have found a way to make it special. At Cioppino, the hook was preserved lemon, but disappointingly this was not well integrated into the dish, so that its bitter-tart flavor did not pervade the seafood or its breading. Still, the squid were remarkably tender and moist, and their coating delicately crispy. But again there was that heavy hand with the salt shaker.

We were most impressed by the frisee and bacon salad, which managed to make bitter, bushy frisee really work. The key was the supporting cast: Thick curls of just-crisp bacon, almost juicy leaves of baby spinach, hearty croutons and a rich but sparing goat-cheese dressing brought unruly frisee into line with complementary flavors and textures.

Turning to our entrees, of course we ordered cioppino, which Alauzen has reinvented, turning a fisherman's stew into a tableside event. Carefully portioned seafood -- our server was at pains to quote the unit count or weight for each -- was arranged in a bowl, and the broth poured over it at the table. Aside from the showy presentation, there are culinary merits to this approach. Each piece of seafood was cooked to its best, and the big chunk of baguette in the middle didn't arrive already soggy. Best of all, the lack of stewing didn't translate into an absence of flavor. The broth was assertive without overwhelming the simple flavor of branzino and snapper or the brinier accents of clams and mussels.

A New York strip steak was thick and substantial, with prominent grill lines and a sprinkling of kosher salt on top. Alas, salt was the predominant flavor in the fontina bread pudding, but the dish did have a cloudlike texture and lovely crisp, brown edges.

For dessert we enjoyed a sort of deconstruction of a brownie sundae, with a dense, almost dry, but intensely chocolatey brownie topped with vanilla gelato. Like the rest of our meal, this displayed attentiveness to detail and creativity enough to stand out without becoming a stunt. Best of all, there wasn't too much salt. 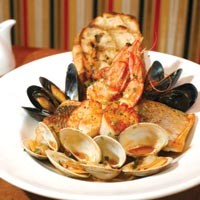