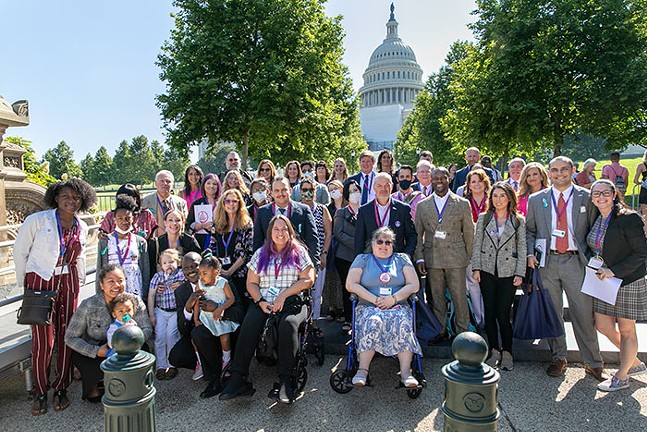 When Tami Seretti wakes up each morning, she never knows quite how long it will take to get out of bed.

Some days, after 40 minutes of gentle stretching, she can ease herself onto her feet and meet the day ahead. On bad days, it can be longer.

“I’ve gone from doing mud runs and obstacle courses to sitting on the couch most of the day,” she says.

Seretti’s health struggles began in 1996 when she started to develop patches on her skin, which were diagnosed several months later as psoriasis plaques. For the next 12 years, she battled through, trying to make the best of a rare condition that caused daily pain and altered her appearance.

But by 2008, the immune cells that had been attacking her skin suddenly turned on her joints. She had developed psoriatic arthritis, a secondary complication of her primary disease that affects about one-third of all psoriasis patients. Similar to rheumatoid arthritis, PsA patients experience pain, swelling, and stiffness in the joints that worsen over time.

Within a few more years, Seretti was registered disabled. For someone still decades from retirement age, the forced withdrawal from work and recreation was crushing.

Through her years of discouragement, Seretti says she’s found purpose in advocating for changes in health care laws that could improve the quality of life for herself and other chronic disease patients.

Last week, Seretti, of Center Township in Beaver County, joined about 50 other patient advocates from across the country who traveled to Washington, D.C. to discuss policy proposals with policymakers and push for change. The group, led by Patients Rising Now, focused on two congressional bills that speak to issues Seretti has faced in her own journey.

“She has a story that is compelling for both of those bills,” Terry Wilcox, Patients Rising Now executive director, told Pittsburgh City Paper.

The Safe Step Act and the HELP Copays Act have both sat in congressional committees since last year. Although they’ve garnered some bipartisan support, without more backing, they could flounder in committee along with the majority of congressional bills.

“This is kind of like a carousel that we’re stuck on,” Seretti says. “I’ve been trying to get cosponsors for the Safe Step Act for six years now.”

She says it is slowly moving forward, but that there are “ just so many things that get in the way … There’s always something going on that takes precedence.”

If passed, the Safe Step Act would allow some patients to bypass step-therapy procedures, a process where insurance companies require patients to start out with the cheapest available treatment before moving on to more expensive options only when they’ve been proven ineffective.

Seretti blames this process for the long years it took to get on the right treatment plan, and believes her arthritis would never have progressed to its present extent if she’d begun her current regimen earlier on.

“Just calling up my insurance company and trying to get my medicine is a full-time job.”

While it won’t alter her situation now, she hopes to see the bill passed so others can avoid her fate.

“Access to care affects everyone, whether they know it or not,” she says.

Enduring the step-therapy process for two decades, Seretti only recently landed on a medication option that brings real relief. But, in the past three years, her monthly copays have risen from $35 to $1,500.

“Now I found something that works for me, and I’m having access issues and affordability issues,” she says.

A co-pay assistance program offered by the pharmacy brings her payments down, but it maxes out at $9,000 for the year, the cost of approximately six monthly refills. If she was paying this out of pocket, she would reach her annual deductible, but her plan uses a co-pay adjustment program that discounts the pharmacy’s contributions.

Her insurance provider tells her they’ve found a workaround through a secondary assistance plan, but she’s gearing up for the worst for her next monthly bill.

“I don’t have much confidence because none of this makes sense to me,” she says. “Just calling up my insurance company and trying to get my medicine is a full-time job.”

The HELP Copays Act is designed to address this by requiring “health insurance plans to apply certain payments made by, or on behalf of, a plan enrollee toward a plan's cost-sharing requirements.”

The bipartisan bill has 38 cosponsors including Brian Fitzpatrick (R-Bucks), Susan Wild (D-Lehigh), and Dwight Evans (D-Philadelphia) of Pennsylvania. But it’s unclear when and if it will get the support it needs to make it out of committee and then clear congress.

“When you look at stories like Tami’s, you see the magnitude of the expense,” Wilcox says. “What you’re fighting against in these bills is not only the insurance and [pharmaceutical benefit manager] lobbies, you’re also fighting the [U.S. Department of Labor] ERISA lobby.”

Seretti says she’s always felt supported by her representatives and, while in D.C., she sensed a growing awareness of the flaws in treatment for chronic disease patients.

The day after Seretti returned home, U.S. Sen. Bob Casey (D-Scranton) spoke among a panel of advocates, where he warned of rising health care costs and urged additional congressional spending.

“There’s no question about the burdens families face. … One is the cost of prescription drugs … second is the affordability and accessibility of home and community-based services … and thirdly is the question of coverage and cost and the opportunity we have to move forward on a range of issues to make sure more Americans are covered in a manner that is more cost-effective for them,” said Casey, a cosponsor on a senate version of the Safe Step Act.

While Seretti waits for political action, she draws strength from the other advocates she’s met along her journey. Her symptoms look very different from those of Crohn's disease or multiple sclerosis patients, but, Wilcox says, their shared victimization amid a broken system gives them much in common.

“They all share cost-prohibitive barriers put in front of them,” Wilcox adds. “[T]hat’s why it’s so important for them to come together.”