"The bottom line is: Not everyone gets multi-million-dollar contracts." 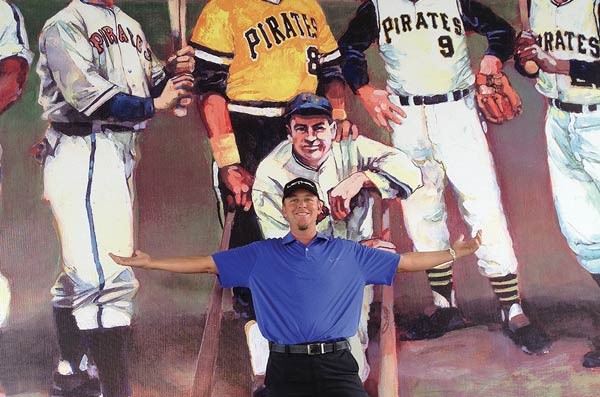 The popular memory of the Pittsburgh Pirates over the past two decades will forever be that of one of the greatest professional-sports franchise failures of all time.

But obscured in 20 years of consecutive losing seasons are athletes who don't think of that time as a failure at all. For them, the Pirates were a golden ticket ― a chance to live a distant dream of being among the best in the world, and being celebrated for it.

Chris Peters was one of them.

Peters, whose family moved to Peters Township when he was a kid, was drafted by the Pirates in 1993, a year after what would turn out to be the club's last winninxg season for two decades. He stayed until 2001, as both a starting pitcher and in a relief role. In 1997, the team won 79 games, securing the best record it would achieve during the losing streak. (The Bucs posted the same record last year.)

"I was on top of the world ― being in the major leagues, being in my hometown," Peters says. But, he adds, no matter how excited you are to be there, losing matters.

"It was tough losing as much as we did," Peters says. "On the other hand, it was kind of one of those things where you look around and there are a lot of young guys. Even though we expected to win every night, you go up against teams with veteran superstar players."

Today, Peters manages a handful of parking lots Downtown and in Oakland. After he left the majors, he sold cars at a South Hills dealership before family responsibilities made the long hours untenable.

Baseball is still part of his life. He spends his summers coaching teenagers, did a brief stint as a pitching coach at Point Park University and, through the West Penn Allegheny Health System, he works with players seeking rehabilitation after being injured.

Peters isn't poor. But he's on his second marriage (his current wife is a teacher), has four kids, and readily acknowledges that his time with the Pirates didn't leave him set for life. (His salary ranged from about $1,000 a month in the minors to his largest contract, a yearly $500,000, in the late '90s.) In 1999, Peters battled injuries and had surgery — his arm wasn't the same afterward. He bounced around after he left the Pirates in 2001, and did a brief stint with the Montreal Expos.

When people recognize him at the parking lots, many of them "are pretty tickled when they hear I first played for the Pirates," Peters says. They also say, "Man, you played major-league baseball; now you're parking cars. That ain't right,'" he adds.

"But the bottom line is: Not everyone gets multi-million-dollar contracts," he explains. "I played for a respectable amount of time, but I didn't play for 20 years."

Joe Maize, Peters' baseball coach at Peters Township High School, says he had a great arm, but was undersized and certainly not ready for the majors right out of school. Even Peters didn't think of himself as the best player on his high school team, let alone a prospect.

"I wasn't necessarily someone that the Pirates really coveted," he says.

He was always athletic and also played basketball and football, but he didn't particularly enjoy college baseball, or the college experience, and he left after his third year at Indiana University.

So why did the Pirates draft him in the 37th round that year?

"It's a good question, really," he says. "I don't think I ever asked them that."

Marc Wilkins, a former Pirate who pitched alongside Peters, is more confident about the '90s-era team and their roles as players. "There's a reason we got to the majors in the first place — we worked our asses off," he says.

"I don't think I ever sat back and thought, ‘Man, we're failing; we suck.'" Wilkins adds. "You always have that ‘We'll get them tomorrow' attitude."