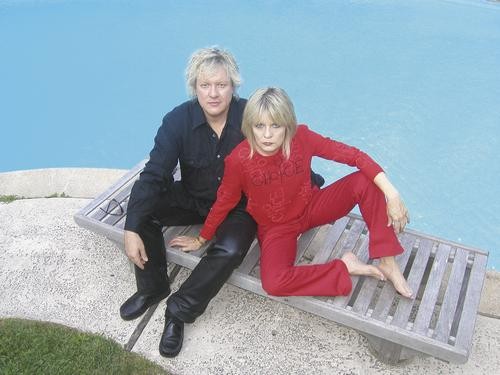 As above water, so below: Tom Tom Club

Tom Tom Club's performance this weekend will be a return for drummer Chris Frantz, both to the city and to the Three Rivers Arts Festival. When he was a high school student at Shady Side Academy in the mid-1960s, one of his paintings was displayed as part of the festival. What the painting looked like, he doesn't remember. But, he recalls, "I was so proud. To us, at the time, that was the pinnacle of the arts scene and the art world in Pittsburgh."

He's had a thing or two to be proud of since then, not least the fact that he's returning to TRAF as part of a tour celebrating the 30th anniversary of his second-most-famous band.

To hear him tell it, Frantz's early life was about as idyllic as a childhood in Pittsburgh can be, full of rope swings, bike rides, big snows and mildly scary visits to see the "Arab Courier Attacked by Lions" diorama at the Carnegie Museum of Natural History.

It was in Pittsburgh that he, at the encouragement of his teachers, swapped the trumpet for drums, and joined his first Beatles-inspired "combos." After graduation, he convinced his parents ("They were really conservative, I think it's safe to say") to let him enroll in the Rhode Island School of Design. There he met his future band-mate and spouse, Tina Weymouth, and David Byrne, with whom he wrote some ditties about psycho killers and warning signs. The three of them -- plus keyboardist Jerry Harrison -- became Talking Heads.

Tom Tom Club, unlike many side projects, wasn't born of a frustrated need for autonomy, or significant interpersonal conflict. After Talking Heads' third record, Byrne announced that he would be taking a break to work on a solo record.

By then, Frantz and Weymouth were married and "were very happy with Talking Heads," Frantz says. "We didn't feel the need to start another band." Weymouth has said that, in the beginning, Tom Tom Club was largely a means to stay fed. As she told Gregory Isola of bassplayer.com, "We had no money, and decided to work up our own songs instead of accepting the session work that was being offered." Island Records producer Chris Blackwell suggested the couple go to a studio in the Bahamas, where Talking Heads had already recorded two records, to see what they could come up with.

Their angularly dancey first single, "Wordy Rappinghood," was rapped by Weymouth ("the star of Tom Tom Club," as Frantz describes her, with proud affection) with wispy, paranoid force. Blackwell loved it, and before long it was an international hit. "All of a sudden." Frantz says, "we had this situation where we were selling more records than Talking Heads. It was a very strange situation to be in, and very exciting."

"Wordy Rappinghood" cemented Tom Tom Club's mix of world and new wave, but was nothing compared to its next single, a bubbly sound-buffet called "Genius of Love."

"We felt like it was something special, especially when we heard the final mix. We said, 'Oh man, this is the shit.'"

From there, Frantz says, the song developed a life of its own. Chances are you know "Genius of Love" in full, either from the radio or from the exuberant Tom Tom Club interlude in the concert documentary Stop Making Sense. (Weymouth and Frantz returned to Talking Heads, often opening as Tom Tom Club while on tour.) If not, you've heard it in pieces courtesy of Grandmaster Flash, or Cam'ron, or on any of the 50-plus tracks in which it's been sampled.

As for the sample's most ubiquitous version -- Mariah Carey's 1995 hit, "Fantasy": "She probably sold more records than anyone," Frantz says. "Of course it didn't hurt that she was married, at the time, to the president of Sony Records." This sounds a bit like self-deprecation, or a mild dig at Mariah, but coming from one of the most genteel men in American rock, it's probably just true. "We like her version; we're waiting for her to call us up to see if she can do another one of our songs."

The big hit is the bane of many musicians. But Tom Tom Club -- despite issuing five solid studio albums since its debut, producing the Happy Mondays' Yes Please and working with Debbie Harry and Gorillaz -- hasn't tried to separate itself from its hit. The group even calls its remarkably enjoyable 30th-anniversary live record Genius of Live.

Maybe that has to do with the collectivist, these-songs-belong-to-everyone spirit of the group, whose list of collaborators is longer than the list of samplers. Or maybe it's because the band members are too busy living happily ever after in Connecticut, hanging out with family and holding impromptu jam sessions with the pool guy in their home recording studio.

"Oh, we're very happy to play our big hit," Frantz says with a laugh. "It's fun to play! Of course, we had no idea that after 30 years, Tom Tom Club would still be going strong." Sometimes, a little fun can go a long way.