"The mosh pit's still there, but it's less violent and more euphoric." 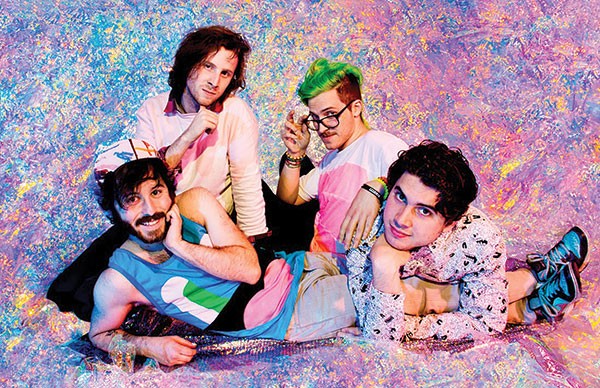 Touring is a video game: Anamanaguchi

Two guitars, a bass, and drums. Lights primed and ready to go. Pedals set, instruments tuned, and monitors balanced and aligned. At this point, most bands' set-up would be done. For Anamanaguchi, however, there's still another essential preparation: making sure the dual hardwired Nintendo Entertainment Systems won't blow out the venue's speakers.

Anamanaguchi is a four-piece band out of New York that uses chiptune — sounds programmed onto hard-wired vintage video-game cartridges — to create its songs. The process isn't new, but Anamanaguchi has been doing it longer, and with more success, than any band out there, as suggested by the band's 554-percent-funded, $277,399 Kickstarter campaign for its new tour and album, ENDLESS FANTASY. Composing entirely new songs on old NES cartridges, the band then plays over the tracks with guitar, bass, and drums in real time, creating a combination of lo-fi 8-bit electronica and high-energy punk rock.

Anamanaguchi isn't just trying to make "video-game music," though. Unlike other chiptune artists who merely emulate their favorite games, the band sees chiptune not as a specific genre, but as a unique style of making music. In ENDLESS FANTASY, it started pulling from jazz and classical influences as much as Mario or Zelda. Pigeonholed as strictly punk or power pop in the past, the band has recently begun to be categorized as dance. The classification solidified when Billboard ranked ENDLESS FANTASY No. 2 on its dance charts the week of its release, beating out even the incumbent will.i.am. The band welcomes the new label.

While Anamanguchi's music is "definitely a fusion," says guitarist and founder Peter Berkman, "I really like the genre ‘dance' because it's vague, you know? A lot of times people are like, ‘Is this post-hardcore?' or ‘Is this postmodern dance?' ... When we were asked, we were like, ‘Let's just call it dance, because that's what we want people to do.'"

And once Anamanaguchi gets going, it's hard not to. The songs are joy incarnate, and while the mosh pit from the band's punk roots is still there, it's become the most upbeat moshing imaginable. Like the video games it pulls from, Anamanaguchi is all about having fun, and while things may sometimes get intense, everyone's still there to enjoy themselves.

"We played SUNY-Purchase, a college here in New York, and at any given moment there was more than one person crowd-surfing," says Berkman. "It was awesome. The mosh pit's still there, but it's less violent and more euphoric. We're all about the partying. We're all about the punk music and the dance music living in the same place. We wouldn't want that to get too out of balance."

Coming off the overwhelming success of the ENDLESS FANTASY Kickstarter, the party is bigger than ever. James DeVito, Anamanaguchi's bassist and engineer, has kicked the visual elements of the band's performances into full-on light shows, including frequency-synced neon poles, custom animations, and rainbow cubes that double as hologram projectors. The results are impressive.

Noticing the success, other artists are deciding to join in on the fun. Bands like Das Racist, Matt & Kim and Ra Ra Riot have all asked the group to do remixes in the past. Anamanaguchi has even been approached by some of the acts that band members grew up with.

"We actually just did one for Cyndi Lauper, which is going to come out in a couple months on her actual re-release, which we're super, super excited about," says Berkman. "It's ‘Girls Just Wanna Have Fun.' We love that song and love Cyndi Lauper.

"Pretty much anywhere we go, people react to [our style of music] insanely well, which is cool," he adds. "It gives us opportunities to be able to do something that people might not have trusted us with before, and it's all stuff that we're all really excited about."

A few years ago, the band dreamed of someday playing Japan. Now, with Japan under its belt, it's touring the world, flying to Europe in early 2014.

According to Berkman, touring the world is the closest thing the band has found to playing a real-life video game. The four have gathered their ideal team of freedom fighters from across the nation, and have set out on a mission: creating positive energy here on spaceship earth.

"That's pretty much it: going places and making people feel excited about life," Berkman says. "Basically the only thing we can ever hope to do is make music we think is beautiful, share it with people who hopefully think it's beautiful too, and then inspire them to do whatever it is they want to."

And the inspiration doesn't stop with the songs. Anamanaguchi already earned a YouTube Music Video Award nomination for sending the first-ever piece of pizza into space via weather balloon, and next the band will be funding a game jam encouraging developers to make computer games based around the album. Berkman says he's hoping for a lot of dating simulations.

Each member of the band brings his own influences and background: Some barely even played video games growing up. But each of them realizes the situation he's found himself in is where he wants to be.

"I think it's kind of like Final Fantasy VII," says Berkman. "There's a moment in that game where everyone's on a plane and they're like, ‘All right, everyone leave and if you feel like coming back, come back.' That's kind of like us. We all have our own reasons for doing it, but we're united by this idea of, like, ‘Let's just have some fun.'"