Opened on June 12, Emotions at Play with Pixar’s Inside Out made its world premiere at the museum. A press release touts it as the first interactive exhibit based on Inside Out, the 2015 Disney/Pixar animated feature following the various emotions of a young girl as they try to navigate the stress of her moving to a new city. The film was lauded by critics for its mission to help kids understand and process feelings as the story is led by the main characters of Joy, Anger, Fear, Sadness, and Disgust.

The exhibit was developed by the Children’s Museum in collaboration with Pixar Animation Studios. It will be on view at the museum until January 9, 2022, after which it will go on tour to museums and libraries across the country.

“Our partnership with Pixar and its animated film Inside Out helps the Children's Museum expand its innovative museum experiences that focus on social and emotional learning,” says Jane Werner, executive director at the Children’s Museum. “This is such an important part of children's development and especially timely as we welcome back children and families to the Museum after such a challenging year."

The exhibit includes interactive experiences that “help visitors understand the important role emotions, memory and imagination play in our everyday lives.” Many of the hands-on and digital experiences are directly inspired by aspects of the film, including a Control Panel where visitors can “explore the range and intensity of emotions.” Other activities allow kids to explore how they express feelings with their faces and bodies, process memories, and how emotions interact, as well as “use their imagination to create a story and perform it at Dream Productions.”

"It was such a pleasure collaborating with the Children’s Museum of Pittsburgh on this exhibit. To see elements of our film re-imagined into interactive experiences is something that, as a filmmaker, brings me incredible Joy (sorry Sadness!). And knowing how informative and fun the exhibit will be for kids and their parents makes all of us at Pixar feel immensely proud,” says Inside Out producer Jonas Rivera in a press release. 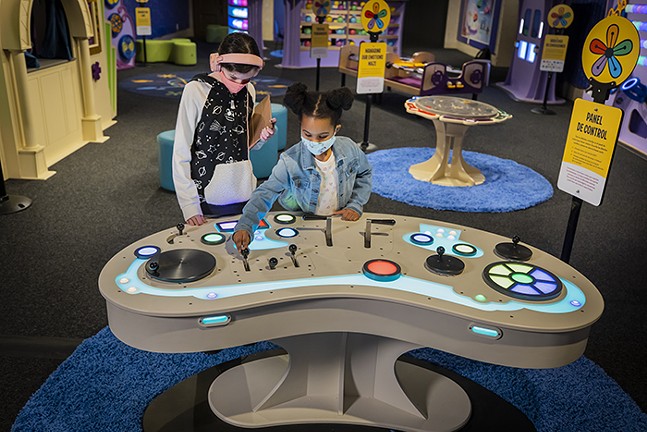 Courtesy of Children’s Museum of Pittsburgh
Emotions at Play with Pixar’s Inside at Children’s Museum of Pittsburgh
In addition to Emotions at Play, the Museum will also debut the Kindness Gallery, where visitors can “express themselves through communications-based activities” inspired by the work of Fred Rogers of Mister Rogers’ Neighborhood, and lessons from the PBS series Daniel Tiger’s Neighborhood. The Museum also launched its Cryptid Critters installation.

The re-opening also means the return of regular Museum content, which has been updated to ensure visits are “exciting, fun, safe and comfortable as possible.” MAKESHOP and Waterplay have been refreshed, while the Garage features two new activities: an interactive projection on the vaulted dome of the former Buhl Planetarium and a new climbing net created by artist Manca Ahlin. The Studio will feature Puppets: A Beautiful Fantasy, based on the Museum’s Margo Lovelace Collection.

The adjacent MuseumLab will also re-open, albeit on Saturdays and Sundays only, with two brand new exhibits, the climbing environment Gymlacium in The Stacks, and FACE VALUE in Studio Lab.

The Nursery and Limb Bender are still closed, as well as the Museum’s Café, though visitors are now being allowed to bring food and drinks to enjoy in the café during their visit. Water fountains in the Children’s Museum and MuseumLab will not be operating.

Even as more people have become vaccinated, and numbers of positive COVID-19 cases and related deaths continue to shrink in Allegheny County, many teens and children have still not been approved for the vaccine, making them potentially vulnerable to the virus. As of April, the Pennsylvania Department of Health updated the vaccine rollout to include residents 12 and older. ​

Because of this, the Museum is still implementing safety measures such as limiting capacity, requiting timed ticketed entry and that all staff members and visitors wear masks, and taking the temperature of anyone who enters the building.

In addition, the Museum added other COVID-19 prevention measures such as installing touchless technology in its lobby and bathrooms, placing hand sanitizer stations throughout its campus, and ensuring that exhibit areas are cleaned and nightly and at intervals throughout open days.

The museum also has updated its hours to be open only four days a week, with plans to “expand gradually.”