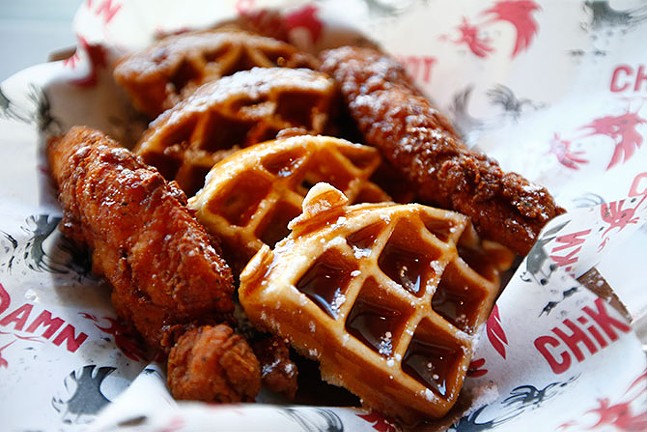 The preparation style — one of Nashville’s most popular dishes and growing nationally — is a cruel one. The chicken, traditionally brined in spicy buttermilk, double-fried, and then layered with heat, will make you cry from both joy and spice. It's crunchy, rich, and doesn't really taste like any other kind of fried chicken.

Most of CHiKN’s food is fried, evident from the long row of fryers that replace a cooktop in its open kitchen. The pint-sized menu lists a Nashville-style chicken sandwich, chicken and waffles, tenders, and a salad. A few sides are available to accompany the entrees: coleslaw, mac 'n’ cheese, fries, and fresh fruit; for breakfast, there are egg sandwiches, avocado toast, home fries, and bacon.

The spice levels for the chicken are listed as Southern (no heat), mild, medium, hot, and damn hot. The top level, "the damn hot," is not for the casual spice fan. Reviewers have called it “brutally satisfying” and “painfully spicy.” (The graphic for the spice scale involves chickens breathing different levels of fire.)

When I put in my order, three tenders at top heat, the cashier asked, "Are you sure about that damn hot?" She was right to double-check, but I went ahead anyway. None of the recognizable characteristics of super spicy food — bright red, a stinging nose — were there. I was easily fooled into false confidence, but thankfully, I still took the tiniest of bites. That was enough. It was a slow burn, and soon, I was wolfing down my waffle to stave the heat. A few coworkers, brave enough to test the heat, called the tenders “just hot enough.” You can still taste the chicken through the heat. (Though, this same coworker had to shed his sweatshirt after a few bites.)

The chicken and waffles were pleasantly sweet, a nice change of pace from the spice. A layer of butter drowned the dish, the dusting of powdered sugar caramelizing in the hot butter. The cakey waffle was the perfect bed for crunchy chicken and when dipped in syrup, gave me every justification to eat fried chicken for breakfast. 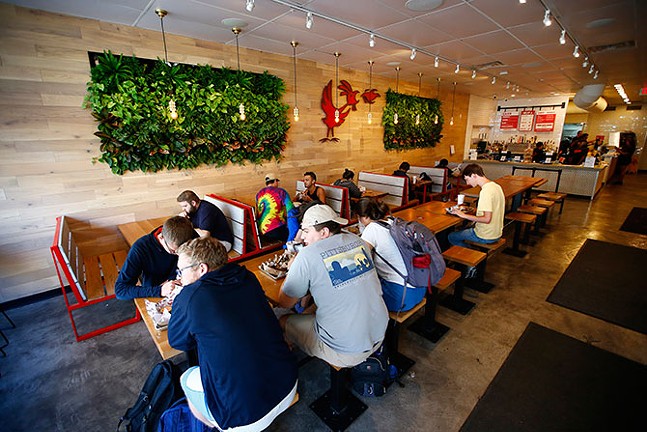 CP photo: Jared Wickerham
The interior of CHiKN in Oakland

For the Nashville Hot Chicken sandwich, I opted for spice level medium ("kinda hot," a chicken only breathing a little fire), and that worked perfectly for me, balancing well with the big, bready bun. The chicken was topped with slaw, pickles, and the restaurant’s Southern-style comeback sauce. The sauce left enough room for the spice to shine, even over the tang of pickles and coleslaw. Apart from a slightly dry piece of chicken, I was impressed.

While I'm generally apathetic when it comes to fried chicken, this place clearly knows what they're doing, both in balanced dishes and the relentlessly spicy ones. Regardless of where you stand on the spice palate scale, you should be able to find something to like here.

1. Wall Plants
The inside of the hip eatery resembles a barn, with pale wood walls and booths. Between the fire-breathing chicken sign are nooks filled with fresh greenery

3. Full bar
Need a drink with your chicken? Check out the restaurant's fully-stocked bar and draft list.