"Before the badge, before the uniform, you are a black man in Pittsburgh." 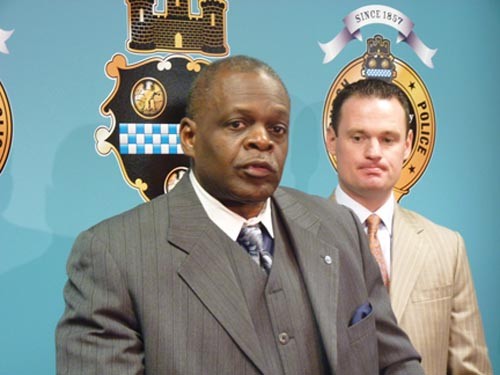 It's not that Ayodeji Young lacks sympathy for Pittsburgh Police Chief Nate Harper.

"I never knock Nate Harper for the shit he goes through," Young told City Paper Sept. 14. Young, who works as a community-outreach coordinator at the Homewood-Brushton YMCA, says, "Nobody knows what it's like to be a black police chief in a predominately white city."

But just three days later, a dozen police officers showed up at Homewood's Stargell Field. During a subsequent press conference, Harper said police had received tips about dice games and drug use near the field during youth football games. Police found a gun "in plain view" during their sweep, he noted.

"We're going to clean it up," the police chief warned, "or else there will be no games."

But it was the kind of confrontation, Young laments, that can only exacerbate hostility between police and the black community. And just days after saying he never knocked Harper, Young admitted, "I'm starting to change my opinion."

"The respect will always be there," he said. "But before the badge, before the uniform, you are a black man in Pittsburgh."

This month marks Harper's five-year anniversary as police chief. But while his tenure began with considerable optimism in black neighborhoods, some community leaders say not enough has changed. And while blame can be shared with rank-and-file officers -- and even the community itself -- critics like Young say responsibility starts at the top.

"You are in a position of power to really change the overall culture of negativity that black people have toward police officers," Young says. "So do it." 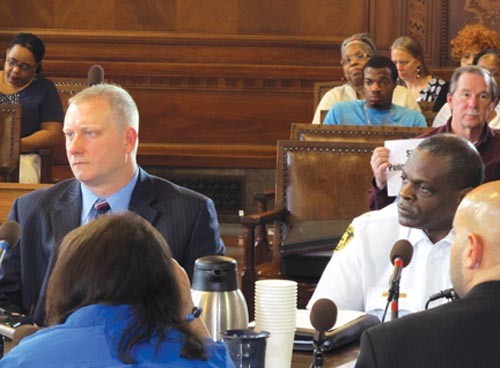 Photo by Chris Young
The beating of Homewood teen Jordan Miles (in blue shirt), and the return to work of the officers involved, has haunted Harper's tenure as chief since January 2010.

Harper became Pittsburgh's third black police chief in the city's history on Oct. 31, 2006. He stressed community relations from the outset.

"I need your support," Harper said during his swearing-in ceremony, according to a Pittsburgh Tribune-Review account. "I know we can change the city and turn it back around. I know that together we can make a difference."

Many black leaders and activists thought so, too. Since Harper is a life-long Pittsburgher, there was hope he'd understand the plight of struggling neighborhoods -- the high crime and poverty rates, the failing schools -- and improve relations between those communities and the 850-member police force. He'd already built up a large amount of community goodwill since joining the force in 1977.

"Chief Harper has always been the kind of person who, if he said he was going to do something, he did it," says Jerome Jackson, executive director of Homewood's Operation Better Block.

"I attended a ceremony at Freedom Corner [in the Hill District] to bless Chief Harper when he got inaugurated," remembers Paradise Gray, a black community activist with the group One Hood. "I had high hopes."

And some defend even controversial efforts, like the show of force at Stargell Field.

Community activist Dave Adams says such clean sweeps reflect "a neighborhood approach that shows [Harper] is willing to take on little battles" in order to fight crime. Only a chief grounded in a community's needs, Adams says, would have the confidence to address a nexus of crime and community events.

"That's strong on his part," says Adams, the CEO and founder of the Conscience Group, which works to solve community problems. "Other chiefs wouldn't touch that."

"He doesn't hesitate to go into the black community and demand cooperation," adds David Harris, a University of Pittsburgh law professor who specializes in police issues. "He will put his money where his mouth is." 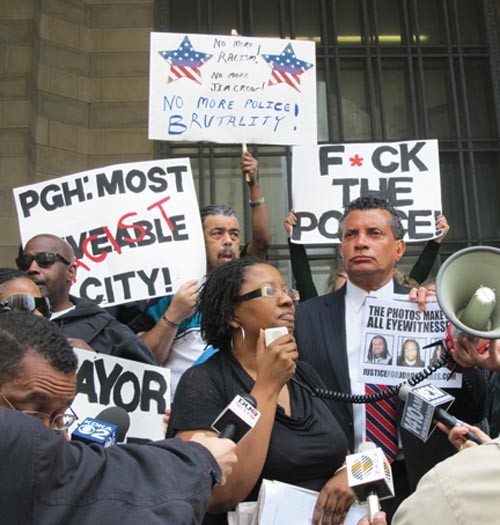 Harper stayed mum for this story, at least: He did not respond to requests for comment, including a list of e-mailed questions. But his critics are becoming increasingly vocal.

One reason is that violent-crime rates in the city remain high. In 2006, there were 56 homicides in Pittsburgh. But despite the Pittsburgh Initiative to Reduce Crime, an anti-gang-violence program launched in 2008, the city still averages 55 homicides per year.

"PIRC is bullshit," Ayodeji Young says. Recently, the city "had a huge spate of shootings. …Violence pops up in different spots in the Hill District and in Homewood really heavy."

And while some laud Harper for taking unpopular stands, the chief's public statements have sometimes raised eyebrows. When 14-year-old Stephon Smith was gunned down in Larimer this August, for example, Harper held a press conference in which he contended Smith was "in the game"

Gray, an outspoken police critic, called that "an insult."

"I don't like the way Harper talks when something happens to one of our people. … We supported Harper, but we don't feel like we got a return on our support," says Gray. "There is still no justice in Pittsburgh."

On Jan. 12, 2010, three undercover police officers arrested Homewood teen Jordan Miles, claiming the then-CAPA High School student was sneaking around a Homewood residence with what they thought was a gun -- and that he ran away after they confronted him. Miles, however, accused the officers of brutally attacking him without identifying themselves as police. Charges against Miles, who did not have a gun, were later tossed out; Miles has filed a civil suit against the police.

News of the arrest sparked protest, with calls for firings and criminal charges against the police involved. But in May, after a lengthy investigation, federal officials decided against pursuing civil-rights charges against the officers. Soon after, Harper announced that the officers, who'd been on paid leave, would return to active duty, without facing discipline.

That announcement prompted a string of protests, with demonstrators hoisting signs reading, "F*ck the police" and "Stop police brutality." Again, Harper's comments may have worsened tensions. In announcing the officers' return to duty, the chief called the situation a "teachable moment" -- for innocent kids. "We would hope that young people realize when a police officer approaches them and they've done nothing wrong to see what the officer wants instead of running away," he said.

Still, some say the Miles case illustrates the difficulties facing Harper. He must, after all, contend with the Fraternal Order of Police. The powerful union leaves little doubt about where it stands on such matters: During the 2010 St. Patrick's Day Parade, FOP members marched together wearing shirts reading, "We Support Our Three Brothers."

"[Harper's] personal opinion about Jordan Miles might be, ‘Fuck those cops. But they've been cleared by the U.S. Justice Department, the FOP is on my damn neck. What am I supposed to say?'" Young says.

In any case, the Miles beating created momentum for more transparency in the police bureau; City Councilor Ricky Burgess, who represents Homewood, has pressed for increased public reporting of police activity like frisks and officer discipline.

While that initiative has been delayed for more than a year, Burgess now expects a reform bill to pass, with a preliminary council vote due this week. Most of the opposition, meanwhile, has come from the FOP itself, whose leaders say the legislation will turn police officers into clerks and lead to more guns on the streets; Harper himself has been notably quiet throughout the debate.

Harper "has to work in a bureaucratic structure," says Beth Pittinger, executive director of the Citizen Police Review Board, which investigates complaints of police misconduct. "That's where the politics comes in."

That structure includes not just Harper's higher-ups, Mayor Luke Ravenstahl and Public Safety Director Michael Huss, but also the FOP's labor contract, which sometimes interferes with attempts to enforce discipline. Efforts to terminate officers accused of domestic violence have also foundered, for example, despite objections from the Ravenstahl administration.

As chair of the Alliance for Police Accountability, Brandi Fisher is a vocal critic of the department. But she allows that there's a "mixed opinion" on Harper -- stemming largely from the fact that although "he's the face of the force, he has to answer to a higher power."

Although nearly one in three city residents is black, only about one in every six police officers is. And the disparity is widening: Of the police department's latest 36-member recruiting class, the Pittsburgh Post-Gazette reported in July, only one was black.

Some community leaders say Harper should do more to address the problem. "There are far too many white officers … who have no understanding of the black community," says Adams, of the Conscience Group. "I don't think [Harper's] been outspoken enough on diversity."

But Pitt's Harris contends that hiring is "beyond Chief Harper's control. He's up against substantial forces, legal and social, that are working against his efforts."

Community attitudes are a big part of the problem, says Jackson, of Homewood's Operation Better Block. He recalls a recent school event where Homewood kids were asked what they wanted to be when they grew up. "Not one of them said a police officer," he says.

"Just think about the interactions we have as African Americans with police," he says. "They're never good."

But Jackson says the community shares some responsibility for that. He says many residents keep quiet about crime, either for fear of retaliation or because they don't want to be labeled as "snitches." The lack of trust breeds more crime, and thus more negative encounters with police.