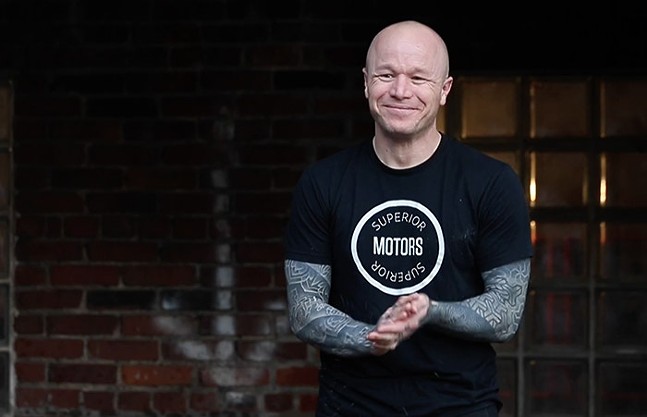 CP Photo: Jared Wickerham
Kevin Sousa at his Superior Motor restaurant in 2018
Acclaimed chef Kevin Sousa has had a tumultuous career in the Pittsburgh region, with several openings followed by several closings. His cuisine has regularly gotten high-level praise, but business troubles have regularly followed his endeavors.

That trend is apparently continuing with the announcement that Sousa and his wife Megan are stepping away from a new restaurant they started less than two months ago. In October, Mt. Oliver Bodega opened in the borough that shares its name, and served gourmet pizzas. It was developed for the real estate company RE360. The restaurant, also called M.O.B., will remain open, and according to the Pittsburgh Post-Gazette, will be run by general manager Chris Clark and executive chef Jonah Frazer.

In a statement from Megan Sousa, she says creating Mt. Oliver Bodega was a "labor of love" for the Sousas, and that they would have like to stayed on, but, ultimately, there were different visions between the Sousas and the owner.

“M.O.B. was created out of love...and out of a passion for what we do — bringing people together over a delicious plate of food, a unique glass of wine, in a beautifully curated space. Bringing M.O.B. into existence was a labor of love between myself, my husband Kevin, and our partner Chris Clark. RE360 hired us to open a restaurant — and that we did. While we would have liked to have remained on board with this project beyond just opening consultants, the relationship between our vision and RE360's were no longer aligned.”

The menu at Mt. Oliver Bodega was inspired by Sousa's Sicilian ancestry, and focused on rustic food of the small landlocked town where Sousa's family is from.

In its brief time opened, it has received praise for its cuisine, but also criticism for its prices, initially up to $39 for a pizza, but later dropped to $30. Sousa has also come under criticisms for the foundation money and accolades he continues to generate, even as his restaurants have failed to stay open.


“Yes, it’s an upscale restaurant, but a $40 pizza wasn’t going to be well-received here," Joe Calloway, RE360's CEO told TribLive. "And I didn’t want to keep fighting about that before it would change.”

The restaurants he started — Salt of the Earth in Garfield; Union Pig & Chicken, and Station Street Hot Dogs in East Liberty; and, Superior Motors in Braddock — have either seen his early exit, or ultimately closed.

Arlington Beverage Club, a restaurant Sousa announced in December 2019 would be coming to Allentown but has yet to open, was also developed by RE360. Calloway told Pittsburgh Magazine that it plans to move forward with the restaurant without Sousa in 2022.