While the coffee isn’t yet flowing at White Whale, they do have some beverages on hand. The Bloomfield bookstore is now carrying fresh-pressed juices from Pittsburgh Juice Company, and kombucha from their sister company Vibrant Sunshine Kombucha. Grab a cold drink during your book browse the next time you visit.

Do you like the cooking show Chopped? How about a local version? Plate It, Pittsburgh sees two chefs competing against each other to make a three-course meal using ingredients sourced from local marketplaces. The show can be viewed on the Very Local streaming channel and is available through Roku, Amazon Fire TV, Apple TV, and Android TV.

East End welcomes 14 local breweries for an event dedicated to all things barrel-aged, from bourbon barrel-aged stouts to oaked ales, sours, and more. Besides East End, expect offerings from Cinderlands, Grist House, Dancing Gnome, and more. The festival will take place on Sat., March 26 from 1-3 p.m., and tickets are available now.

This event was originally slated for 2020, but as with many pandemic-era things, was postponed. Now in 2022 the organizers are ready for you to join them on the Gateway Clipper, where you can enjoy brews from local breweries. Tickets will go on sale at the end of March and names of participants will be announced soon.

The Cheese Queen, a charcuterie-based food business, will open a location in Mt. Oliver this spring. The Cheese Queen is owned and operated by Megan McGinnis, from the family that ran the McGinnis Sisters Special Food Stores from 1980 to 2018. The Cheese Queen brings fancy cheeses, meats, nuts, and dried fruits to the neighborhood, so lookout for an opening date.

Wigle wants customers to "go green" for the upcoming St. Patrick's Day holiday with its Absent Minded Absinthe. The spirit is described as being infused with a "host of organic, whole botanicals," including wormwood, fennel, mint, orange peel, and star anise. 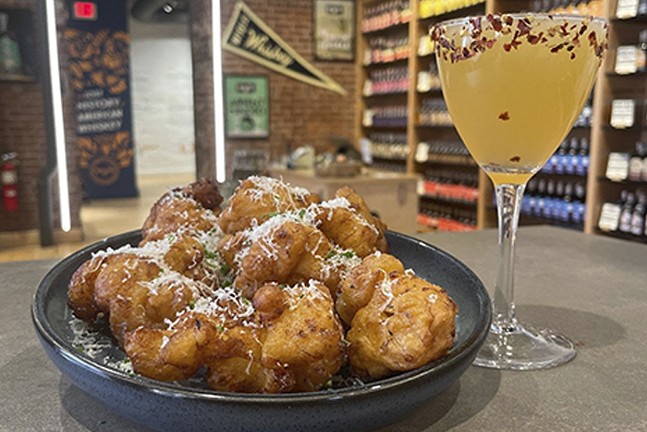 Photo: Courtesy of Wigle Whiskey
Ukrainian-inspired food and drink pairing by Wigle Whiskey
The distillery is also hosting a food and drink pairing benefiting those suffering from the ongoing crisis in Ukraine. "Our hearts are with the people of Ukraine, our Ukrainian American neighbors, the Russian citizens who are bravely protesting the invasion, and all who are suffering because of this needless violence," reads an email from Wigle. The Ukrainian-inspired food and drink pairing starts Wednesday and includes Ukrainian Pampushka cheese fritters topped with garlic butter and parmesan, paired with a spicy Honey Bourbon cocktail named мир, which translates to "peace" in Ukrainian. Reservations can be made now and all proceeds benefit the efforts of World Central Kitchen, an on-the-ground nonprofit that provides meals in response to humanitarian, climate, and community crises, in Ukraine.

Alta Via will be opening a new pizzeria in Bakery Square later this month. Alta Via, which specializes in pasta dishes, hopes that people will enjoy its pies with a glass of wine or a craft cocktail, a departure from the traditional grab-and-go pizza experience.

Sweet Alchemy Bakeshop is putting on another Vegan Vinyl night in collaboration with Preserving Record Shop in New Kensington on June 11, but they want a few more vendors to round out the event's awesome selection. There are a few slots left, so if you’re a local business looking to push your wares, this might be a great opportunity for you. Head to linktr.ee/sweetalchemyllc to access the application.

Humane Action Pittsburgh is hosting their first Best Vegan Soup in the Burgh Cook-Off on Sun., March 20 from 11 a.m.-2 p.m. Some of the restaurants ladling out soup will be Disfrutar, Farmer x Baker, Veggies N’At, and more. Visit the Vegan Pittsburgh Instagram and check the link in their bio for more details.

Want to work at one of the coolest places in the city? Join the Casa Brasil team. The restaurant is now hiring a dishwasher, line cook, and other kitchen staff. The application process can be found on their website.

Farmer x Baker will be opening their riverside location on April 1. Have dinner or lunch with a view at this beautiful location.

Speaking of reopenings, after taking six weeks to reimagine the business, Scratch & Co. will return for business (softly) on Fri., March 11. With a new collaborative menu featuring small and mezze plates, revolving entree specials, and a Kitchen Tasting Menu, this reimagining is sure to invigorate the Pittsburgh foodie crowd.

This Allison Park-based dairy farm took home first place during the recent Biennial World Championship Cheese Contest in Madison, Wisconsin. Goat Rodeo won with their cheese Bamboozle, a blend of goat and cow's milk aged for two months in barrels washed with an unfiltered pilsner from Pittsburgh’s Cinderlands Beer Co.
Have news about a Pittsburgh bar or restaurant? Send it to danijanae@pghcitypaper.com.