Pittsburgh has a storied past, with its origins as an established city dating back a few hundred years. With that age comes a spooky reputation, and those looking for Halloween activities that also allow for COVID-19 precautions might want to check out some reportedly haunted sites in the region.

“Haunted sightseeing would be a good alternative because you can social distance and keep the groups small,” says Brian Seech, co-founder of the Butler Paranormal Conference, and the Centers for Unexplained Events and Cryptozoological Studies.

Pittsburgh City Paper reached out to some local experts to put together a “haunted” tour of the city and the surrounding region.

Some recommendations came from the local ghost-hunting group, Iron City Paranormal Investigators, who believe that Pittsburgh’s industrial past has contributed to its status as a haunted city.

“Personally, after investigating many locations, not only in Pittsburgh but also around the TriState area, we do feel that Pittsburgh holds a strange combination of history and tragedy surrounding the blue collar workers from the past,” says Iron City Paranormal co-founders, Derrick Smith and Daniel Metelsky, in a joint statement. “Old-timers from the area worked their lives away, only to have them cut short by devastating injuries and horrific accidents. These are the kinds of energies that tend to stick around a particular location, and Pittsburgh holds a plethora of this energy from its past.”

Whether or not this “energy” has any connection to the supernatural has little bearing on the eerie feeling that comes with visiting an abandoned building or a remote part of the woods.

No matter what, Seech says visitors should “always be respectful of the sites and any possible spirits that may be there.”

“Enjoy the experience for what it is, and do not go in with any preconceived notions on what to expect,” says Seech.

Sceneridge Road, McKeesport. alleghenylandtrust.org/green-space/dead-mans-hollow
Before Allegheny Land Trust acquired Dead Man’s Hollow in 2017, the 450-acre stretch of wilderness located in the Youghiogheny River Valley had quite the reputation.

Behind its winding trail systems and wildlife conservation areas is a creepy history connected to the land's sometimes tragic industrial past, with claims that casualties of the former Union Sewer Pipe Factory, as well as a quarry and brickworks, still haunt Dead Man’s Hollow. Hikers and bikers might stumble upon graffiti-covered ruins and ghost towns from a time before the area was abandoned. There have also been tales of a 40-foot snake, buried loot, and more.

Iron City Paranormal investigated Dead Man’s Hollow, claiming to have “recorded voices and even felt like we were being watched.”

There are plenty of places to research the eerie side of Dead Man’s Hollow before your visit, as many blogs, news articles, and books like Legends & Lore of Western Pennsylvania by Thomas White have covered the subject. Even if you never have a paranormal encounter of your own, at least you’re going outside and appreciating some of the region’s natural beauty.

Piney Fork Road, South Park Township
“Green Man” or, alternatively, “Charlie No-Face,” has become the stuff of local lore as a hideous ghost who prowls the roads of southwestern Pennsylvania. While terrifying, the Green Man has its roots in reality, giving the story a more tragic turn.

The dreaded Green Man was Raymond Robinson, a man who was left with severe facial disfigurement that included the loss of his eyes and nose after being electrocuted as a boy. To avoid being seen, Robinson, who lived in Beaver County, often took walks alone at night along Route 351, but he has been most connected to what has become known as the Green Man Tunnel, a narrow rail tunnel on Piney Fork Road that is sometimes used to store road salt.

While it may have been startling to see Robinson along a dark road, and most likely led to many stories surrounding his ghostly status, local news stories painted him as a quiet, kind man.

After Robinson’s death in 1985, the ghost of the Green Man Tunnel still persists after being passed from generation to generation. Honor Robinson’s memory by visiting the tunnel and connecting, in a more positive way, to an obscure piece of the region’s history.

rwin Road, North Park
You won’t have to leave the car during a trip to Blue Mist (sometimes spelled “Myst”) Road. While details vary, one thing remains consistent about what makes this road strange — a stretch of unpaved road in North Park becomes covered in a mysterious blue mist. From there, the stories range from familiar urban legends about teens parking and being attacked, to sightings of strange lights, to rumors about a witch who once lived there. Some stories are questionable and, honestly, tasteless, including ones involving the Ku Klux Klan and little people.

If you choose to explore Blue Mist Road, please be mindful of your surroundings, including any signs or blocked-off areas. You can also explore the area during the day by hiking or biking on a trail that leads through the Irwin Run conservation area. 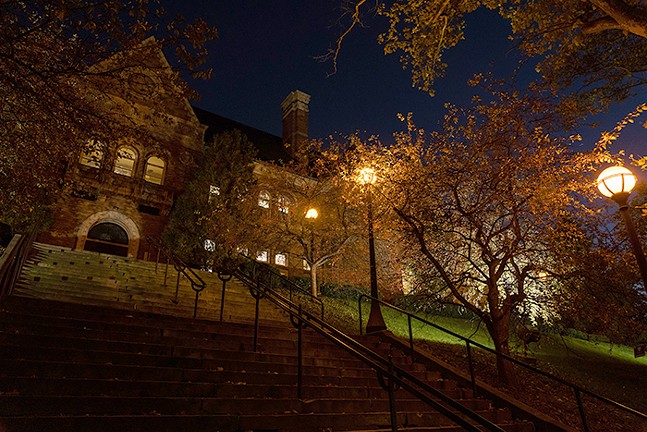 510 E. 10th Ave., Munhall. carnegieofhomestead.com
The Carnegie Library of Homestead is considered haunted enough that it warranted a visit from the SyFy Channel’s Ghost Hunters in 2011.

Home to a free library, as well as a music hall and pool and gym facility, the site has become a hotbed for paranormal activity. Witnesses claim to have heard mysterious voices and laughter, particularly in the gym locker rooms, and have seen books fly off the shelves.

But the most notable piece of lore involves someone very well-known to Pittsburgh — late industrialist Andrew Carnegie, who founded the library in 1898, and whose apparition is said to now haunt the building. Carnegie gifted the building to local steelworkers and their families to try and make up for his role in the deadly Homestead Strike of 1892. Because of this, some have reported seeing the ghosts of soot-covered steelworkers wandering the property.

The Carnegie Library of Homestead has reopened with updated hours. But whether you’re hunting for ghosts or a good book to read, all library patrons must adhere to COVID-19 safety guidelines, including the wearing of face masks and social distancing.