Check out The Abbey on Butler Street, in Pittsburgh’s trendy Lawrenceville

The shortish menu is in the au courant gastropub mode 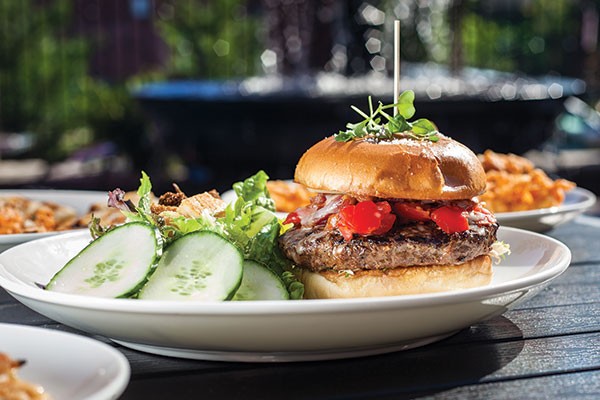 The Abbey on Butler Street

The name of The Abbey might be inaccurate, but it isn’t misleading. The building’s former roles as a masonry shop, foundry and funeral home have resulted in a sprawling, eclectic array of spaces embellished with medieval-esque stonework, heavy wooden ceiling beams and stained glass — details that lend it an almost-religious, deeply Old World atmosphere.

It would take a highly iconoclastic vision to adapt this assemblage to a restaurant, and Abbey owners Eric Kukura and Chris McAleer have supplied it. Within its various rooms are contained an array of services: a coffee bar, cocktail bar and dining room. Flourishes have been added flourishes that update the spaces while working with their distinctive character. The lyrics of “Bohemian Rhapsody” have been calligraphed on a frieze board extending the length of a hall, where a giant, round booth awaits. Television screens are tuned to nature scenes. The frame of an enormous rose window serves as a magnificent ceiling fixture.

The menu is rather more restrained, in both length and breadth. It’s in the au courant gastropub mode, but the limited selection — 10 appetizers and small plates, three burgers and three pastas — requires considerable curation on the part of executive chef Thomas Christakos. Flavors bounced from Italian to Mexican to Southeast Asian.

The Back Yard Burger was what it sounds like, but with the chef’s “1K sauce,” essentially house-made 1,000 Islands dressing. The plump patty was mild, more like tenderloin than the chuck stated on the menu, with a trace of sweetness and not quite enough sear to add really deep, smoky flavor.

Sriracha chicken dip was a more exciting venture. Finely shredded chicken in a mild, cream-cheese-based medium — spreadable more than scoopable — was kicked up by the sriracha to an unmistakable heat. Served with triangles of fluffy grilled naan, this was irresistibly delicious.

Alas, the same condiment was out of place on an otherwise outstanding banh mi bruschetta, a clever deconstruction of the famous Vietnamese hoagie using tender pork belly and shredded, lightly pickled vegetables on bias-cut, grilled slices of baguette. The bread had plenty of character without being too tough to bite and chew. However, the relatively one-dimensional heat of the sriracha threatened to overwhelm the toppings without contributing the necessary smoky-sweet notes.

A seasonal mushroom bruschetta with fresh herbs and asiago cheese is also available and represents one of several worthy options for vegetarians. Others include fried halloumi cheese in a roasted-red-pepper sauce; Mexican-style grilled corn-on-the-cob with cotija cheese and a sprinkling of salt; and zucchini a couple of ways: tempura-battered with wasabi aioli and ponzu for dipping, or shredded into noodle-like ribbons and tossed in pesto with tomatoes, garlic and mushrooms.

Surprisingly for such a brief menu, there were also two potato dishes with overlapping preparations: papas bravas — roasted and fried with ancho chili sauce and cotija cheese — and smashed oven-baked Yukon Golds with Gouda cheese, sour cream and scallion oil. We chose the smashed, but they were disappointing. Good smashed potatoes retain a crust where they have been mashed against the hot pan; these were crustless. Worse, the interiors were light and fluffy in some bites, but in others, barely cooked.

The beans, intensely flavored with garlic and rosemary, were the best part of grilled shrimp and white beans. The shrimp’s complementary flavor was bold to match, but its texture was a little mushy.

Mac-and-cheese has become de rigueur from taverns to fine-dining establishments, but whether overloaded or understated, seldom rises to the occasion. The Abbey’s “Abbey Normal” mac-and-cheese shows how it should be done: a simple, sophisticated blend of cheddar and asiago cheeses; the perfect pasta, cavatappi, whose helical tubes delivered the maximum amount of the creamy, sharp, nutty sauce from the dish to our taste buds; and a restrained yet flavorful suite of mix-ins: savory bacon, juicy tomato and zesty green onion. If only all mac-and-cheese could be this good.

When most new restaurants seem to be following similar formulas to compete for Pittsburgh’s newly hip clientele, The Abbey is genuinely both original and comfortable, deservedly confident in its ambitious, iconoclastic concept.