Remember to tip on the full bill: Your bartender works just as hard, half-priced drinks or not 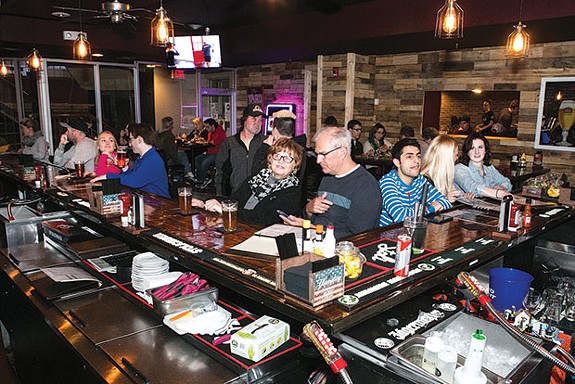 Happy hour is a magical thing. It offers respite after a rough day, an incentive to try out somewhere new, and a chance to save a few bucks at your favorite watering hole. Below, check out our picks for some of the happiest hours in town. Oh, and remember to tip on the full bill: Your bartender works just as hard, half-priced drinks or not.

The Foundry Table & Tap, 381 North Shore Drive, North Side: A recent addition to the booming area around the stadiums, The Foundry is the perfect place to grab a drink before a game or concert. From 4-6 p.m., enjoy half-priced drafts and house wine, along with $5 signature cocktails and $6 small plates, including pork-belly bites and haluski.

Full Pint Wild Side Pub, 5308 Butler St., Lawrenceville: In 2015, Full Pint Brewing, a fixture of Pittsburgh’s beer scene, opened a satellite pub in Lawrenceville. Though they don’t brew there, they do offer a wide selection of Full Pint drafts, from popular staples like White Lightning to experimental sours and barrel-aged beers. Stop by between 5 and 6:30 p.m. to get any of them at half off.

Hidden Harbor, 1708 Shady Ave., Squirrel Hill: When Hidden Harbor says happy hour, they mean it. Tuesday through Friday, get there between 5-6 p.m. for half off a special menu of 10 tiki classics. The drinks, which include perfectly balanced Mai Tais and Painkillers, are full strength and fully garnished: The only thing they skimp on is the price.

Kaya, 2000 Smallman St., Strip District: Kaya is a staple on best-happy-hour lists, and it’s not hard to see why. From classic mojitos and inventive originals (like the mezcal-based Smoke & Ginger) to rotating craft drafts, nearly every drink on the menu is half off from 4:30-6:30 p.m. Take a trip to the tropics without the expensive plane ticket.

Mad Mex, multiple locations: Stop by a Mad Mex between 4:30 and 6:30 p.m. for “Happy Hora.” House margaritas, including the whopping 22-ounce “Big Azz,” are deeply discounted, and drafts are all half off. The draft list is particularly impressive at the North Hills location. A rare barrel-aged imperial stout? For four bucks? Yes, please.

Rivertowne, multiple locations: You can get other beers at Rivertowne’s four locations, but the company’s own brews are so diverse and so delicious that there’s really no need. The happy-hour offerings are generally the same at all four locations — North Side, Verona, Monroeville and North Huntingdon — from 4-6 p.m. weekdays. At the location near PNC Park, for example, it’s $2 off drafts, $1 off bottles, $1 off well drinks and $3 snacks. Beers range from Always a Home Game, a traditional golden lager, to Hala Kahiki, a crisp, tasty pineapple beer.

Seviche, 930 Penn Ave., Downtown: At Seviche’s happy hour, options range from cheap to crazy cheap. From 4:30-6:30 p.m., grab a $5 mango margarita, a $4 glass of cabernet or a Negra Modelo for a measly three bucks. Plus, you can soak up all that cheap booze with $5 tapas. And Seviche boasts the white whale of discount drinking: a Saturday happy hour.

Sharp Edge, multiple locations: Sharp Edge has long been Pittsburgh’s destination for Belgian beer. Unfortunately, those rare imported beers often come with a hefty price tag. Not to worry: Swing by between 4:30 and 6:30 p.m. to get half off all Belgian and craft drafts. And with a location Downtown, a potent Belgian tripel is the perfect antidote to a rough day at the office.

Smallman Galley, 54 21st St., Strip District: With its unique food hall/restaurant-incubator concept, Smallman Galley already had a lot going for it. Then it added a killer happy hour. From 5-7 p.m., Tuesday through Friday, get half off all cocktails, wine and beer, served up by one of the best bar teams in the city. Sitting just a stone’s throw from Kaya, there’s no better block for post-work tippling.

The Yard, multiple locations: At its locations in Market Square and Shadyside, The Yard offers comfort food and a wide selection of craft drafts. In addition to the usual happy-hour suspects (discount drafts, half-off apps), adventurous drinkers can take a chance on the $5 drink of the day. And with rotating specials every night, the party keeps rolling after happy hour ends.