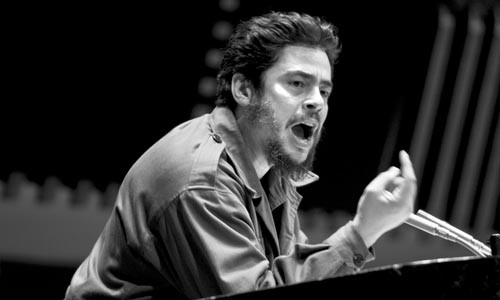 The endlessly mythologized Ernesto "Che" Guevara led a life seemingly in exclamation points ("¡Patria or muerte!") and epic gestures. He -- naturally -- suffered the glorious death of a martyr, leaving behind an iconic name and image to be enshrined as the ultimate romantic revolutionary.

But Guevara also left copious published diaries, and these are the source material for Steven Soderbergh's four-hour-plus film. Eschewing the easy romanticism that might drive such an epic biographical feature, Soderbergh makes a concerted effort to downplay the myth of Che and the scope of his life. Focusing on just three relatively brief points in Guevara's history, Che dispassionately presents "the perfect man" as simply a man, albeit a thoughtful sort of man who led an interesting life, guided by a series of convictions.

It's an intriguing approach, but I'm not sure what to make of this film that provides no background on Guevara or historical context (does Soderbergh really expect contemporary audiences to be up on the intricacies of both Cuban and global politics in the 1950s and '60s?); ditches the heroic Che but fails to fill out this stripped-down character; and chooses not to tell a particularly coherent narrative?

The film, which has been screened as a whole, is being presented by Pittsburgh Filmmakers in two parts over two weeks, beginning this Friday with Part 1: The Argentine. (Part 2: Guerrilla starts Fri., March 27.) Each film has its contained story and you can just see one film, but the larger arc spans both, as Guevara and his ideals rise, and then fall. In that respect, the film could easily be titled "Che: The Concept," with subtitles "Success" and "Failure."

Part 1 begins with the Argentine doctor Guevara (Benicio Del Toro) meeting Fidel Castro in Mexico, and takes place mostly during 1957-59. From the Cuban countryside, the rebels, including nascent leaders Castro and Guevara, plan and execute their takeover of the Bautista regime. Soderbergh intercuts this regularly with a recreation of Guevara's trip to New York City in 1964, during which he addresses the U.N.

The scenes of the growing revolution lurch forward, with events both pivotal and mundane -- Che is promoted; Che visits the sick; Che gives a pep talk; men come and go -- as one would expect from a diary. These scenes feel disjointed, and are often dull or confusing.

Livelier is Che's trip to New York, which Soderbergh shoots in black and white, like a newsreel. The NYC footage fills in much of Guevara's revolutionary philosophy, albeit after the fact. In essence, these two strands represent the inward and the outward -- from the successful micro focus of the campesinos' revolution toward the pinpoint of power in Havana, to Guevara's 1964 mission where he sought to export the revolution to other nations. (Part 2 is the dissolution of that plan.)

While Guevara was triumphant in Cuba, Part 1 ends with a bit of sardonic humor that foreshadows some of the troubles of Part 2: Despite the earnest creeds of revolution, people are a notoriously difficult resource to marshal.

Part 2: Guerrilla focuses on Guevara's attempt to import the success of Cuba's socialist revolution to other nations. In 1966, Guevara secretly left Cuba for Bolivia, where he again took to the mountains with a few compadres, hoping to lead the poor peasants in an armed overthrow of the government. (Part 2 begins with some unidentified photographs of child miners, but again, the viewer must mostly supply his own economic and political history of Latin America.)

The film hunkers down for a year in the mountains with Guevara and his increasingly beleaguered rebels, while occasionally cutting away to the efforts within the Bolivian government and military to ferret out and capture Guevara (including a cameo from a "U.S. military adviser"). The flair and charisma Guevara displayed in Part 1 is largely absent, and Soderbergh, too, reins in his show, dispensing with the wide-screen pre-revolution footage and artsy black-and-white for a boxy aspect ratio with no visual gimmicks.

The grand plans now seem more quixotic than noble, and various disputes render the group increasingly marginalized, fragmented and dispirited. Guevara, who often seems one asthmatic gasp away from death himself, counsels: "To survive here, to win ... you have to live as if you've already died." Yet, these words are a hollow recitation, not some invigorating rally cry.

In the final 45 minutes of Che, Soderbergh, after lurking in the woods of dogma, reaches for more conventional, and entertaining, filmmaking. (Even Soderbergh can't avoid the dramatic end that history supplied.)

The last act begins with an eerie march by the rebels into an empty village that recalls the off-beat foreboding of revisionist Westerns. Then, there is a lengthy final stand-off in the forest between Guevara's few compadres and Bolivian soldiers that is shot intimately, nearly at ground level. Whereas previously, such long sequences of confused silence and inaction frustrated, here the same narrative murkiness effectively underscores how a decisive moment -- Guevara and his exported revolution have failed -- transpired with a pathetic banality.

The last we see of Guevara in Bolivia is a weirdly affecting shot in which his shrouded corpse -- strapped to the exterior of a helicopter -- appears to float impotently over the land that couldn't be roused and proved to be his undoing. It's one of Soderbergh's few Che-is-just-a-man moments that works.

What really keeps Che afloat is Del Toro, who is one of those actors who can make an often taciturn, stoic protagonist still feel compelling. Del Toro carries a lot of film's dead weight and transcends its idiosyncrasies, like the scores of poorly identified characters, all dressed alike. At least when yet another dirty bearded guy is talking to Guevara, you're riveted.

Che is one of those films that has "deeply personal project" stamped all over, and while it's not a total success, it's certainly an interesting experience. Soderbergh, who alternates between Hollywood A-list features and indie pet projects, has swung for the fences, but it would seem his ideals -- demythologizing Che, eschewing the bio-pic mold, choosing "reality" over plot or emotional hooks -- have made Che a nutritious if flavorless dose of movie-making rather than a tasty, fulfilling platter of engaging cinema.