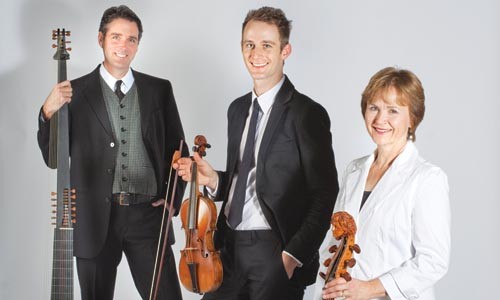 Perhaps an unlikely lightning rod, Bach's centuries-old St. John Passion has sparked controversy in the past half-century. Penned in 1724, the work's libretto was gleaned from the Book of John, which, of the four gospels, places the blame for Jesus' crucifixion most squarely on the Jews of Jerusalem. Because of this libretto, Bach has borne charges of anti-Judaic sentiment.

This month, Chatham Baroque will present a performance of the Passion -- and a discussion of the issue at hand.

"We play a good deal of sacred music," says Chatham violinist Andrew Fouts. "But we're a secular organization, and we thought it would be a good idea to bring this up and have a real dialogue."

The local three-piece chamber group, celebrating its 20th year, is working on the project with Bach scholar and Pitt professor emeritus Don O. Franklin. St. John was performed during Bach's lifetime, says Franklin, but was largely eclipsed in popularity by his St. Matthew Passion. The piece became controversial after World War II, as Lutheran takes on Judaism were scrutinized in relation to Nazi anti-Semitism.

But Franklin believes that Bach in fact tempered John's take on Jews' role in the crucifixion. In contrast with the passion pieces composed by contemporaries like Telemann, "[Bach] was saying, 'We're all guilty, we're all responsible,'" says Franklin. "The John text is there, but he put those comments in context."

Performances of Bach's Passion works are normally done with larger orchestras, but Chatham Baroque's will involve only about 20 guest vocalists and instrumentalists (still large for a Chatham performance). But this seemingly barebones arrangement matches that of Bach's original performance of the 1725 version. According to Franklin, it's the first time the piece has been performed in this manner in America.

The performances -- March 26 and 27 -- are preceded by a free March 23 discussion at Church of the Redeemer, in Squirrel Hill, part of the Christian-Jewish Dialogue series. Franklin and some of the performers will participate along with Christian and Jewish clergy. More details on the discussion and concerts can be found at www.chathambaroque.org or by calling 412-687-1788.