Photo: Courtesy of Reiko Yamamoto
At first glance, the Tiny Smiles magnets made by Pittsburgh-based ceramic artist Reiko Yamamoto don't seem like much. But the small, flat discs, all featuring a face with a slightly upturned mouth, are meant to have a larger impact on isolated customers and nonprofits dealing with the COVID-19 shutdown.

“I thought of it more as a gesture, and it's really just a reminder for people, [where you're] physically looking at a smile and trying to replicate that every day,” says Yamamoto, who was born in Japan and now lives in Lawrenceville.

The Tiny Smiles are $7 each through her website, with sales being given out in increments to various local nonprofits. As of April 7, Yamamoto says she has donated $1,050 of the proceeds to various organizations, including $200 to the Greater Pittsburgh Community Food Bank specifically.

“I wanted to keep it kind of flexible depending on what's going on,” she says, adding that she has a running list of organizations she plans to give the funds.

Yamamoto initially created the Tiny Smiles in response to the 2016 election of President Donald Trump, adding them to orders anytime someone bought one of her other handcrafted items, which include cups, bowls, and other functional tableware, as well as decorative pieces and jewelry. 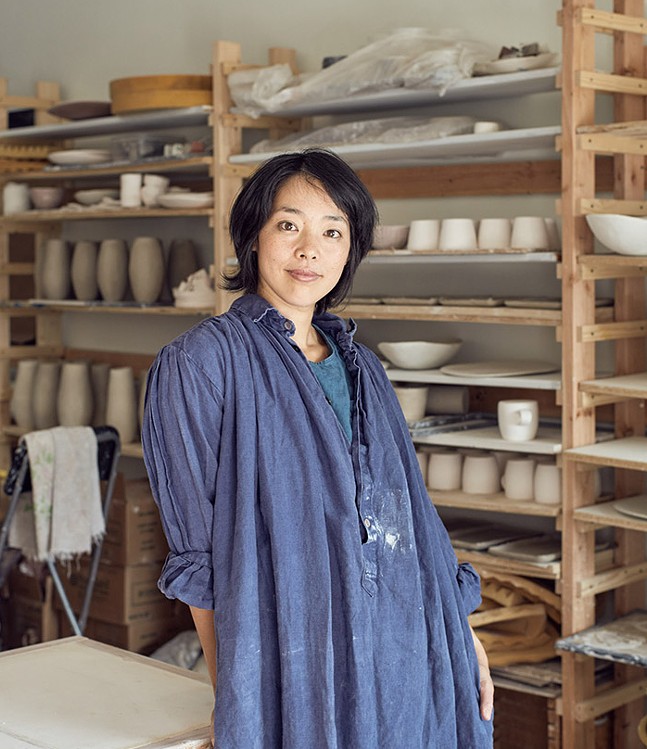 Photo: Ross Mantle
Reiko Yamamoto
“I was feeling like I needed a way to give a little hope because I felt quite distraught and disappointed,” she says. “I was thinking about what I might be able to contribute using my craft. It wasn't a big smile, because at that time I couldn't have a big smile. I thought I might be able to manage a little smile.”

She says she felt like it was “the perfect time” to bring them back in a fundraising capacity as opposed to as a small gift for customers.

While Yamamoto has lost some selling opportunities due to the shutdown — including the cancellation of the annual Mother Of Pottery Sales, set to happen this April at the Union Project — she says she has done little to push her online store to focus more on finding ways to help the community. As someone with a freelance position producing media for a company in Japan and with no overhead (she has no staff or space to manage), she feels more fortunate than many others dealing with the crisis.

“I feel like some people, their survival rests on these few weeks or month, and my business is basically myself and my studio,” she says.

However, she made sure to produce over 400 Tiny Smiles just in case she loses access to her Sharpsburg-based studio, which could potentially be shut down due to its status as a non-life sustaining business.

While she does plan to continue making and selling other work, the Tiny Smile fundraiser is her biggest concern. Right now, it's the first thing users see when they access her website.