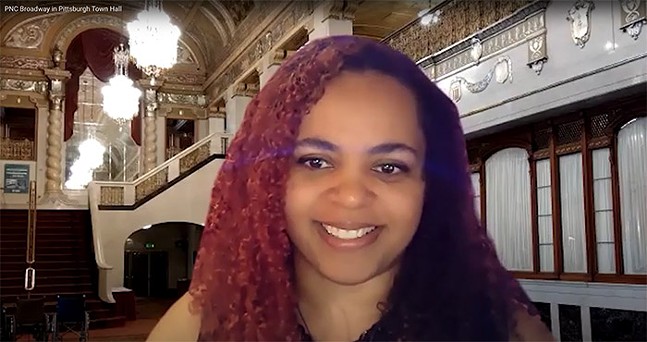 Members of the Pittsburgh Cultural Trust, Broadway Producing Offices, and Broadway Across America addressed hundreds of fans of the local broadway series to discuss “the road back to the theater” in a virtual town hall on YouTube on Tue., Oct. 27.

However, McMahon added, “We cannot and will not open our doors until it’s safer to do so.” But, he assured viewers that they are doing everything they can during what the Cultural Trust refers to as its “extended intermission” during the pandemic, which has shut down the Benedum’s doors since March.

The town hall was hosted by Joanna Obuzor, operations manager of the Benedum Center, and Marc Flemming, vice president of marketing, communications and broadway programming at the Pittsburgh Cultural Trust. Featured guests included a Broadway producer, doctor, and booking agent.

At the end of March, after COVID-19 protocols shut down theater in Pittsburgh, the Cultural Trust prematurely announced a new lineup of eight touring PNC Broadway shows to begin in August and to continue into 2021.

Since that announcement, however, cases of COVID-19 have continued to rise in Pittsburgh. Today, subscribers were told that Hamilton is the only definite show on the original list to remain.

“We are going to deliver seven great Broadway shows when we’re able to do so, and most importantly, when it’s safe to do so. I can tell you that Hamilton is confirmed for its return in early 2022 and that will remain part of your subscription," Fleming said during the town hall. "In regard to the other six shows, there are no changes to announce at this time, but there may be some changes coming, we just ask that you remain patient as the pandemic continues to affect this entire industry."

Sue Frost, Tony award-winning producer of Broadway’s Come From Away, says unlike sports arenas and smaller productions, socially-distanced crowds are not possible for Broadway shows.

“We need to come back to full houses,” Frost told subscribers during the town hall, adding that in addition to the importance of audience participation for the actors, it’s not financially possible for Broadway shows to tour unless the theaters are full.

Obuzor said The Pittsburgh Cultural Trust is already making preparations for its theaters for when it’s time to reopen, with a “Roadmap to Reopening,” telling the town hall it’s taking the advice of health experts and sharing that it will be requiring guests to wear masks and maintain proper physical distancing.

The Trust also addressed audience questions, assuring that anyone with credits from canceled events have been applied to current subscription orders. (Those with further questions can call 412-456-1390 Tue-Fri 10 a.m.-5 p.m.)