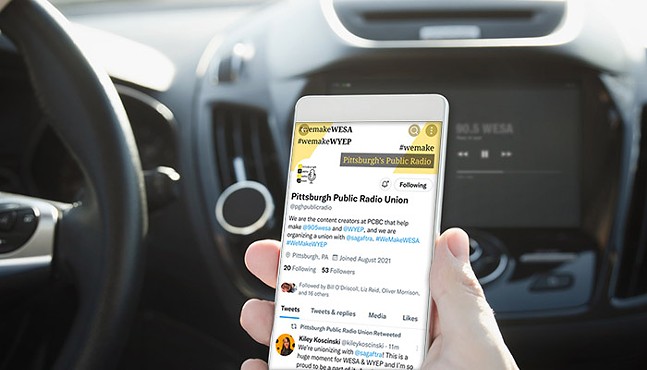 President and CEO Terry O'Reilly has indicated through an internal staff email that the Pittsburgh Community Broadcasting Company management will not voluntarily recognize a union requested by workers at its two public radio stations.

O'Reilly's email, obtained by Pittsburgh City Paper, disputes national union group SAG-AFTRA's claim that "a supermajority of workers" signed and delivered a petition request to management shortly before going public at 9 a.m. yesterday morning. The statement was outlined in a press release and repeated in subsequent media coverage.


"We received nothing from anyone about this matter yesterday," O'Reilly wrote.

The email, reportedly sent around noon, then acknowledges receiving "a packet of documents" earlier today, and indicates management will refer the organizers to the National Labor Relations Board rather than voluntarily recognizing a union, as workers say they requested.

"We did receive a packet of documents this morning from SAG-AFTRA, but we are awaiting an official set of documents that the National Labor Relations Board will be sending us; that will begin the process of allowing our employees to decide, through a confidential vote, whether they want to be represented by SAG-AFTRA or not."

O'Reilly also criticized local media coverage of yesterday's events, stating he has so far remained silent publicly in part because of dissatisfaction with the reporting.

"It’s just not our practice to comment on things that are either misreported in other media or about which we have no first-person knowledge."

O'Reilly did not respond to a request for comment made by Pittsburgh City Paper shortly before Tuesday's public announcement.

Organizers referred questions to a SAG-AFTRA spokesperson, who said the California-based media union stands by the account given in yesterday's release.

"At 8 AM on August 30, the organizing committee emailed the PCBC leadership team a petition signed by an overwhelming majority of employees requesting that PCBC voluntarily recognize SAG-AFTRA as their union," the spokesperson said in an email to City Paper. "They did so in the spirit of collaboration and professionalism, and are disappointed that management has no interested in that."

Reached for further comment on his email, O'Reilly referred questions to PCB's Director of Marketing Michele Klingensmith, who declined to comment.

According to yesterday's release, content creators from both the company's stations, WESA and WYEP, have formed a bargaining unit that "includes hosts and disc jockeys, reporters, editors, producers, and others."

As the news broke yesterday, union organizers publicized a Pittsburgh Public Radio Union twitter account, making known their demands, posting "We are the journalists and content creators who make @905WESA and @WYEP."

In an interview with City Paper yesterday, WYEP host Rosemary Welsch said the push to unionize was driven by staff desires for increased input and transparency in company decision-making. "I hope that they’re going to recognize that this is something that’s good for the whole organization," said Welsch, who first joined the station as a volunteer in 1981. "This is not against anything, it is for something."