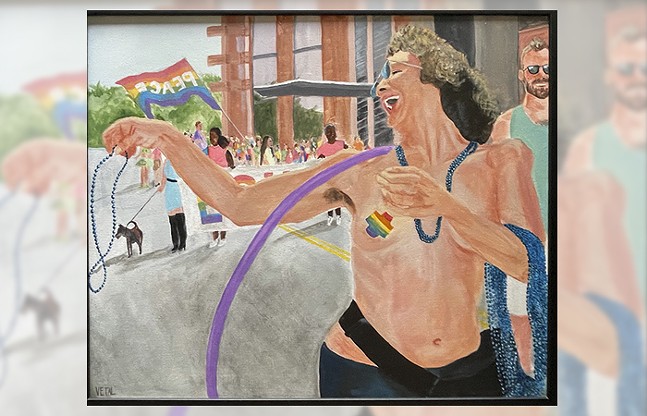 Courtesy of the Thomas Merton Center
From its origins protesting the Vietnam War to its current focus on combating racism, poverty, and other social ills, the Thomas Merton Center has been committed to bringing about what its mission calls a “more peaceful and just world.” Continuing this work requires support, something the Pittsburgh organization hopes to generate with Lost & Found: A Pop-up Museum, a two-day fundraising event described as “celebrating the community, art, and activism that has kept TMC going for almost fifty years.”

Lost & Found will feature live performances, and an open mic and gallery show. It will also include an art auction, and the center wants local artists to submit to it.

The Center is accepting art submissions for loan, donation, or auction at Lost & Found, taking place on the first weekend of December in a yet undetermined location on Penn Avenue in Garfield. The Center’s executive director Gabriel McMorland says submitted works can come from all mediums and represent a variety of themes, as long as it “makes a statement for peace and justice.”

The deadline for submissions is Sat., Oct. 30, and artists will receive 60% of auction sales.

McMorland says they are also seeking “artifacts, relics, and mementos from past protests and movement work, including signs, banners, puppets, buttons, or anything else that speaks to the power of that movement moment.”

“We’re so grateful to all the artists sharing everything from anti-war posters and mental health zines to handmade pottery and oil paintings connecting with the spirits of nature,” says McMorland. “We want to bring community together around the fires of imagination."

TMC will also accept sponsorships as part of Lost & Found, with tiers ranging from $50 to $2000. The event website says the sponsorships will support the center’s Garfield-based thrift store, anti-racism workshops, and work on “social and environmental justice campaigns from local pandemic relief to international human rights.”

The center acknowledges that, because past fundraising events bring in anywhere from 300 to 400 guests, they have added virtual options for those who want to participate but are wary of crowds due to the recent surge in COVID-19 cases. This includes a digital tour of the gallery space and a live virtual broadcast.

Those interested in submitting art for Lost & Found should visit thomasmertoncenter.org/art.