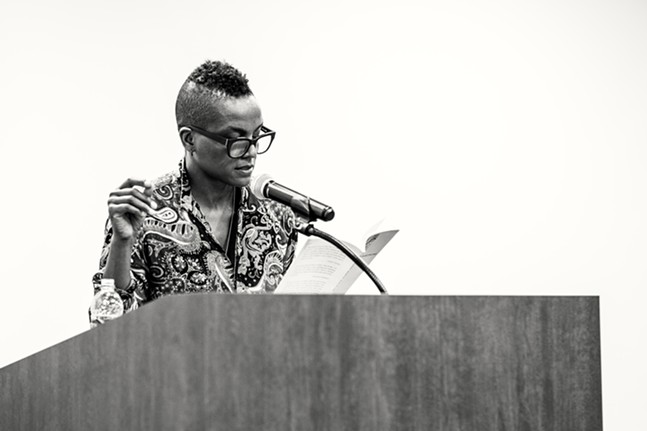 Photo: Marcus Jackson
Co-Founder of CAAPP Dawn Lundy Martin
The Center for African American Poetry and Poetics has released its spring lineup of online events, continuing the University of Pittsburgh group's mission of highlighting, promoting, and sharing the poetry and poetic work of African American and African diasporic writers.

The events kicked off on March 3 with a conversation on time with Ladan Osman, Demian DinéYazhi´, Aldrin Valdez, and Divya Victor. This collection of poets and visual artists sat in conversation on Wednesday, leading the season of events in a strong way.

CAAPP launched in 2016 and has continuously brought unique programming to Pittsburgh since its inception. With events going online, the audience has expanded to a national and even global stage.

As a creative think tank, CAAPP has the opportunity to bring some of the most innovative minds in poetry to Pittsburgh and beyond, especially with its fellowship.

CAAPP event graphic
The fellow for this year was poet and writer Justin Phillip Reed, author of two full-length volumes of poetry: Indecency and The Malevolent Volume. The Center for African American Poetry and Poetics Fellowship is a two-year-long commitment that provides “a space for Black artists to be free to think and create over a long period of time and get paid for that work,” says Martin. The theme for the first event in this season’s series came about after a conversation between Martin and Reed.

Said Martin, “So it was just a riff between us. I think that the manifesto began with this question of time because of all of the stuff that each of us might carry, must carry during this particular time, it's really layered and it's really complex. We're expected to carry all of that: the pandemic — at the time — the weight of Trump's presidency, the weight of the murder of Black people, the justice system not holding people accountable. We're meant to carry all that and then participate in normal life. So we really wanted to kind of say, in some ways, how do we enter the creative sphere as people of color, as Black people, given all of that.”

While the focus of CAAPP is to highlight voices from across the Black diaspora, this season’s events incorporated the visions of other people of color in conversation with one another. On this, Martin remarks that “part of it was just about thinking about in creative practice, what allyship means.” She talks about the “cross-racial uprisings” that have happened in the wake of the murders of George Floyd and Breonna Taylor, and how a coalition of people across races rising up together to defeat white supremacy inspired CAAPP to expand the scope of its programming.

“We just wanted to bring folks of color together to think both creatively and critically outside of the normative constructions of race that have been imposed onto us,” adds Martin.

Martin also speaks about how poetry functions in political and protest spaces. Given the uprisings we saw over the summer of 2020, and despite what some may think, art and poetry have a hold in these spaces often fraught with the tension of injustice.

“Poetry has a role to play when it comes to affecting the hearts and minds of those who encounter the work," says Martin.

CAAPP has been able to support poets through its fellowship, but also through its book prize. Inviting poets and artists to speak about their work is one way to support them during this time.

“I think that institutions should recognize and continue to support artists if they have the financial resources to do so in the same ways that they were supporting artists before when folks were meeting in person,” Martin remarks, adding that, while institutions and artists have adapted to conversations and performances in a COVID world, being in front of a screen on Zoom often requires more exertion than showing up to a venue in person.

Artists and poets should be compensated with that in mind, especially artists of color who are often short-changed when it comes to creative opportunities.

If you are a poet or artist looking to get involved with CAAPP, Martin says the door is always open to pitch ideas for events and collaborations with community partners. As an organization, they are very interested in conversation and collaboration, and it’s rare that they will invite an individual to do a reading or performance, so keep that in mind before you pitch your grand idea.

The next event in the series will be on Wed., March 17 at 6 p.m. and will feature a conversation with writer Lauren Michele Jackson, filmmaker Tayarisha Poe, and poet-journalist Jacqui Germain. You can register at caapp.pitt.edu/events.