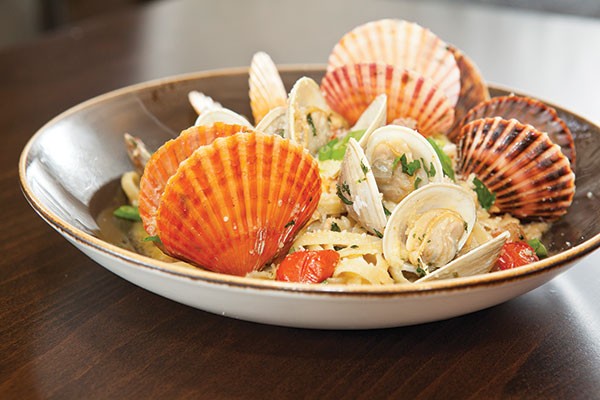 In our supposedly "paperless" digital age, we are buried in papers: mail, communiqués from schools, camps, keepsake programs and ticket stubs, and so on. On a recent excavation of papers, we came across the business card of Fede Pasta, bestowed by a server in a lovely restaurant we dined at several years ago. The pasta there — a shape we'd never seen before — was so exceptional, we inquired and received Fede's card, along with the explanation that it's a small producer in the east suburbs. Since then, we've enjoyed Fede's noodles in a number of other fine restaurants; we've almost come to expect them in those following the fresh-local-seasonal credo. When we learned that Fede had opened its own restaurant, we could hardly wait.

Cenacolo is not a place you'd ever stumble across. Although the address is Main Street in North Huntingdon, this is no central business district. Rather, it's an off-the-beaten-path business park. On the ground floor, around the back, Fede's retail store and restaurant share a small, windowless space. It may sound dismal, but the shop is bright and filled with fascinating things, from meats and cheeses for antipasto to gleaming machines for rolling, cutting and slicing various shapes of pasta. Two tiny dining rooms are romantically lit — although not dim — and their heavy, majestic woodwork suggests the artisanship of centuries of Italian history.

As for the menu, Cenacolo wisely sticks with its natural strengths. Aside from platters featuring the meats and cheeses sold out front, there are half-a-dozen starters and a dozen pastas, and that's it.

While the menu categories are stripped down, the pasta dishes are not. The kitchen doesn't dally with any of the classic sauces (although our friendly server did offer some simpler dishes to our children). Instead, ingredients are chosen to complement the pasta shapes (each dish is identified by its shape, with no repeats). There's a clever method to maintaining so many options without resort to standard sauces. Recipes rhyme without actually repeating ingredients: There are three seafood options utilizing different shellfish, while cured pork appears variously as pancetta, prosciutto and speck. Each dish is distinctive, and it was hard to choose among them.

While we awaited our entrees, we started with polpette — meatballs in marinara — and fried artichokes with lemon and basil. The latter featured a shaggy coating on artichoke hearts, by turns crunchy and tender, mild enough to allow the vegetal artichoke to shine, absorbent enough to hold plenty of lemon juice. The meatballs, made with prosciutto and mortadella, were richly flavored with a flavor profile that differed from the standard Italian-American (Jason thought he detected allspice), while the accompanying tomato sauce was a vibrant reminder of the way canned tomatoes can keep us tasting summer all through the winter.

Cenacolo takes "fresh mozzarella" to a towering new level with cheese that is stretched from curd to round while you wait, then arrives still warm in a shallow pan of water, delightfully stretchy and mildly creamy. It's served with pesto and roasted red peppers on hearty, lightly toasted bread for a wildly satisfying stack of flavors and textures.

Linguine with seafood was reminiscent of classic white clam sauce, but here chunks of pancetta added earthy savor, while halved grape tomatoes countered with sweet brightness. In addition to clams — some served in their shells — the dish was adorned with a pair of bay scallops, also in their shells, prettily offering up their morsels. Although white wine was present in the sauce, the overall effect was a bit muted, with less of the brightness of vongole. It was a satisfying plate, though the elements didn't quite seem to balance.

Lamb tortelloni featured plump pockets of tender lamb served in a sauce that combined the bright sweetness of marsala with the tender richness of a braised lamb shank. And with Fede pasta, there's no question of hoping for more filling and less noodle: Each bite was perfect.

Ricciolina, a thick, tubular pasta, was served with chicken, cauliflower and leeks, brought together in a rich cheddar cream. Here, pistachios were a surprisingly successful component, with a distinct texture that was firm but not crunchy. Pasta alla chitarra — long noodles cut with guitar strings — featured a meat sauce heavy with rich ground beef and tasting, delectably, like a cross between homestyle Italian-American and a classic Bolognese. Our meal concluded with excellent, fluffy, mousse-like tiramisu.

Fede's growth from wholesaler to retailer to restaurant is cause for pastaphiles to celebrate.