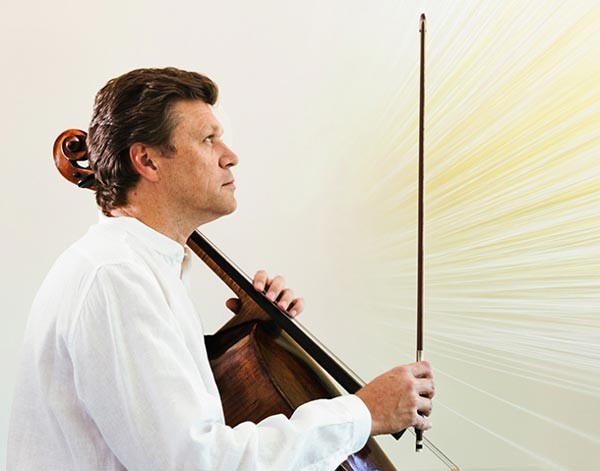 An acquaintance who actually had tickets would enter the women’s restroom and open the windows, so that the schemers could jump inside the window from a nearby building. They joined the standing-room audience … just to hear, not even see, Yo-Yo Ma perform.

In 1989, Istomin would make an even bigger leap.

Istomin is now a cellist at the Pittsburgh Symphony Orchestra. He is also the founder of the Pittsburgh Piano Trio; a faculty member at the City Music Center at Duquesne University; and artistic director of the Music Business and Advanced Chamber Music Seminar. And he runs a marketing agency.
But none of these professional endeavors would have been possible if Istomin had not defected from the Soviet Union in 1989.

In 1987, Istomin, 22, became the cellist for the Leningrad Conservatory String Quartet. In 1989, that group went on two trips out of the Soviet Union: one to Paris for the celebration of the 200th anniversary of the Storming of the Bastille, and later that same year, a tour through the U.S.

In September 1989, his quartet ended its American tour with a stop at Towson University, in Baltimore. Though Towson students hosted the quartet, the members were also supervised by Soviet officials.
Still, Istomin felt different in the U.S.

“Something came into our minds,” Istomin says. “Everything seemed very right in America. We were breathing differently, but we still knew we were Soviet people.”

Two nights before their departure, Istomin and a fellow quartet member, Yuri Alexov, sat with Towson students, discussing their U.S. experiences. The Towson students pressed the musicians to stay, but both Istomin and Alexov didn’t know how to do it or if it was even a possibility.

On their final day in the U.S., the quartet was to be escorted to a nearby shopping mall.
“I had this feeling that I should not be going,” Istomin says. “Plus, I did not know where my friend Yuri went. I decided to stay in the hotel.”

After the rest of the quartet left, Alexov returned to their shared room and told Istomin, “Let’s go.”
Before Istomin could comprehend what was happening, he was packing his cello and music and stuffing his belongings into hand luggage.

A young Russian-speaking American man and a young American woman accompanied them to the immigration bureau in Baltimore. The four of them sat in the bureau for roughly seven hours. While Istomin waited for the Russian-speaking student to translate the government officials’ questions about the Soviet Union, he couldn’t help but think about what he was leaving behind. He was only 24 years old. His entire family was in the Soviet Union.

At the end of the investigation, the immigration officers dismissed the group and said they would consider the case. They were released from the bureau at 9 p.m. Istomin stepped outside just as a guard shut the door behind them.

“It was an old metal door, with a chain that locked from the inside,” Istomin. “The sound of that clanging metal made my back completely wet from sweat. In that moment I realized: I can’t go back. I can’t go anywhere. I’m not even fully allowed to stay here.”

A month later, both men were granted political asylum.
Since his defection and the fall of the Soviet Union, Istomin has performed all over the world.
Among the memorable trips: the Pittsburgh Piano Trio’s tour of the Ukraine in 2004 during the end of the Orange Revolution. Following a run-off vote in the November 2004 Ukrainian presidential election, which many claimed was tainted by corruption, thousands participated in a campaign of civil resistance through January 2005. The supporters of populist candidate Viktor Yushchenko wore orange; supporters of the government’s favored candidate wore blue.

The trio’s Kiev performance was scheduled on the same day as the re-vote, Dec. 26, 2004; Yushchenko won that vote.

Istomin says it was one of the most memorable concerts he has ever played and wishes he had had a camera on stage to take a picture of the audience, to capture this “historic moment.”

“We walked on stage and the hall was full of people, half wearing orange, half wearing blue,” Istomin says. “There was such a mix of energy that I didn’t know what to think at first. What an amazing feeling.

“But here they were, all sitting together. They were all so exhausted emotionally. They sat in silence but cheered at the end of every piece. Music brings people together.”