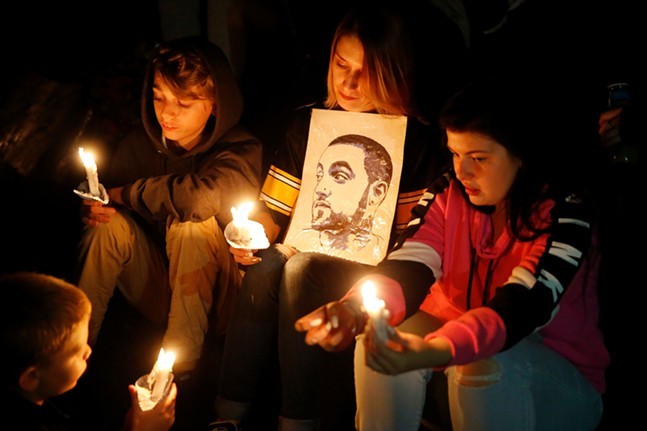 CP Photo by Jared Wickerham
Vigil for Mac Miller in 2018
Mac Miller was a musician who many Pittsburghers had a great deal of pride over. Making it from a local act to the international stage showed that musicians from the city had talent and drive, and his death in 2018 at just 26 years old was felt by many in the community and beyond. Just days after the news broke, a vigil was held on Sept. 11 at Blue Slide Park, the playground namesake of Miller's debut studio album.

Memorials for the late rap artist, real name Malcolm James McCormick, have continued since then, including the upcoming Celebration of Mac Miller.

After being canceled in 2020 due to the pandemic, Celebration of Mac Miller returns this year on Sept. 10 at Blue Slide Park. The date was announced on the Mac Miller Memoir Twitter account on July 9.

"After being apart from the Machead community in 2020, we can't wait to see all of the new and familiar faces again this year," reads a statement by Mac Miller Memoir.


Fans from around the world have attended the event in the past, and the group is prepared for the same to happen again this year. Because of this, Celebration of Mac Miller organizers are encouraging face masks and hand sanitizer for the event to keep participants safe and healthy.

The residents of Pittsburgh have found many ways to honor Miller’s memory throughout the years. A mural went up in East Liberty, memorials popped up all over the city alongside the one in Blue Slide Park, and Daily Bread in Bloomfield invited fans into their space to celebrate Miller’s life back in 2019. In June, the Pittsburgh Foundation’s Center for Philanthropy even launched a grant program to support local BIPOC artists in Miller's name.

Those attending this year's event will note the date change from Sept. 7, the official date of Miller's death. The team at Mac Miller Memoir says they worked closely with Miller’s family and decided that a new date would be better suited to celebrate the late rapper and producer.

“It was an important decision made with Mac’s family that we chose a new date dedicated to celebrating his life and legacy. We have decided that further events should not take place on the 7th of September," reads the statement posted to Twitter.
Celebration of Mac Miller. 4-9 p.m. Beechwood Boulevard and Nicholson Street, Squirrel Hill. Follow @MacMillerMemoir on Twitter for updates