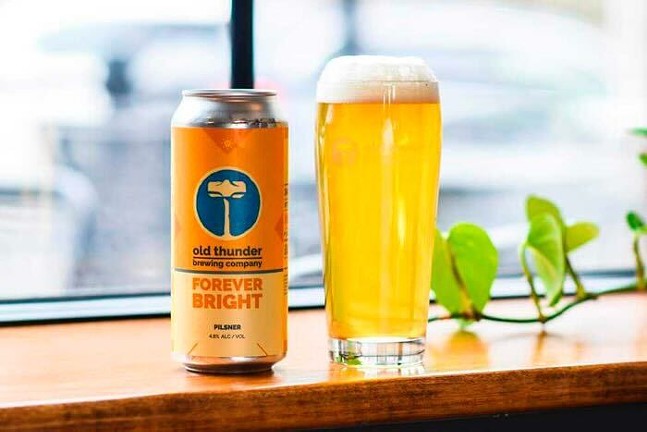 Photo: Old Thunder Brewing
Old Thunder's Forever Bright pilsner
While many Pittsburgh breweries have exploded in popularity and acclaim off the success of their IPAs, stouts, and sours, some beer fans and makers would be perfectly content just drinking lagers and pilsners all year long. This spring, they’re getting their wish.

Pittsburgh will host three beer festivals dedicated to lagers and pilsners over the next month. First up is Allegheny City Brewing’s Logger Jam in the North Side, Old Thunder Brewing’s PilsBurgh in Blawnox follows, and then Golden Age Beer’s Lager Fest in Munhall.

Things kick off on Sat., April 30 with Logger Jam at Allegheny City Brewery’s newly revamped Beer Garden (very limited tickets available here). For the brewery, it represents the culmination of a reinvigorated interest in the style.

“I think right now in Pittsburgh, it feels as if lighter, clean, clear lagers are getting buzz for a few reasons,” says Al Grasso, ACB co-owner. “One, some of the local brewery owners and brewers really embrace the lager styles and have made the decision to lead with them. Two, a super clean, light lager is technically more nuanced to brew, so it's more of a challenge and more fun for some brewers.”

The lineup will provide festivalgoers with some of the very best in the Pittsburgh beer scene. Expect beers from Dancing Gnome Beer, Coven Brewing, Cinderlands Beer, Necromancer Brewing, Abjuration Brewing, and many more.

Not only will there be a large collection of breweries pouring, a whole range of “clear beers” will be available for people to sample. We’re talking west coast lagers, Smoked Helles Lagers, Kellerbiers, Pilsners. You name it, ACB will have it.

With tickets to Logger Jam running low, or if you haven’t gotten enough lager for your liking, you won’t have to wait long to get back out there. Old Thunder, one of the rising stars of Pittsburgh breweries, is hosting PilsBurgh: A Night of Pittsburgh Pilsners on Thu., May 5.

“We have done a few lager-focused events here at Old Thunder, and they seem to keep increasing in popularity, which is exciting to see,” says Zach Gordon, co-owner and director of brewing operations. “These events have become a melting pot for beer fans and industry folks alike. It’s really nice talking with everyone over a pint of good lager.”

Once again, everyone gets in on the action here, from Brew Gentlemen to Crime and Punishment Brewing Company to Hop Farm Brewing, all paired with food from Blowfish BBQ and Farmer+Baker.

Not to be outdone, Golden Age Beer wraps things up with its own Lager Fest on Sat., May 14 (tickets here). While the event will also feature a wide range of beer from the likes of Voodoo Brewery, Stick City Brewing Company, 11th Hour Brewing, East End Brewing, and more, the biggest draw here might be the venue. The fest will take place at the former Slovakian Catholic Church in Munhall, now a music hall and event space run by marketing agency This is Red. In addition to offering more lagers than you could ever want, the festival will also feature four live bands including Pittsburgh favorite Buffalo Rose, and a variety of local food trucks.

In many ways, pilsners and lagers are the perfect spring beer. Light, refreshing, and easily drinkable, they represent the warm weather and the joy of having a beer with friends. And with three exciting new festivals this season, beer fans can certainly make sure that happens.Logger Jam: A Celebration of Local Lagers. 12-3 p.m. Sat., April 30. Allegheny City Brewing. 510 E. Ohio St., North Side. $49. alleghenycitybrewing.com
PilsBurgh. 3-10 p.m. Fri., May 5. Old Thunder Brewing Company. Free admission. facebook.com/oldthunderbrewing
Golden Age Lager Fest. 1-9 p.m. Sat., May 14. This Is Red. 605 East Ninth Ave., Munhall. $50. goldenagebeer.com/lagerfest