An insurance salesman finds life – and laughs – in Iowa 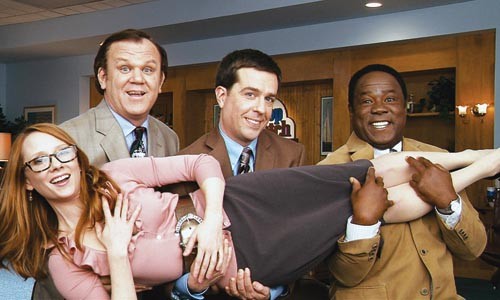 This isn't the great comedy that 2011 is still waiting for. But for a gentle, if foulmouthed lark set in a relatable milieu, a trip to Cedar Rapids may be worth a ticket.

Our hero is Tim Lippe (Ed Helms), an insurance salesman from a small town in Minnesota. He lives in his boyhood home, is having an affair with his former elementary school teacher and is apparently too clueless to notice he works for a company called Brown Star.

When Brown Star's top guy dies suddenly, Tim takes his place at a regional conference held in the "big city" of Cedar Rapids. Tim is wide-eyed about the plane trip (his first); the hotel's indoor pool ("smells like the beach!"); and his boisterously jolly fellow salespeople.

It's a sort of budget affair held at some mid-priced suburban chain hotel where three agents share a room to save money. Thus, Tim finds himself bunking down with the loud, boozy Ziegler (John C. Reilly) and Wilkes, a more mild-mannered professional. (Wilkes is played by Isiah Whitlock Jr. who so indelibly portrayed state Sen. Clay Davis on The Wire, and fans of that HBO show will get an extra laugh or two.)

For awhile I feared this film would take the easy route -- let's make fun of the impossibly naïve country bumpkin with the dull job -- but once Tim got established at the convention, the story found a more believable groove. There, most of the jokes revolved around Tim's amazement, horror and puzzlement about what goes on at a cheesy regional insurance convention -- and his enthusiastic embrace of the wider world.

The convention proffers plenty of smile-ready set-ups, from the awkward prayer breakfast to the treasure hunt modeled after The Amazing Race. But beneath the laughs, Tim also has to figure out exactly whom he can trust, and what price he's willing to pay for success. We may already know that the drunk, nearly naked guy with a trash-can lid on his head is really a better person than the well-groomed Bible-thumper, but Tim's still learning.

The best of Miguel Arteta's comedies have a darker edge -- Chuck & Buck or The Good Girl -- but this is closer to the feel-good, sweet-nerd vibe of his more recent Youth in Revolt. Tim's a likable dude, with a good heart and the potential to grow. So when he transforms from an awkward little boy into a man of principle (with occasional partying), it makes for a satisfying journey.