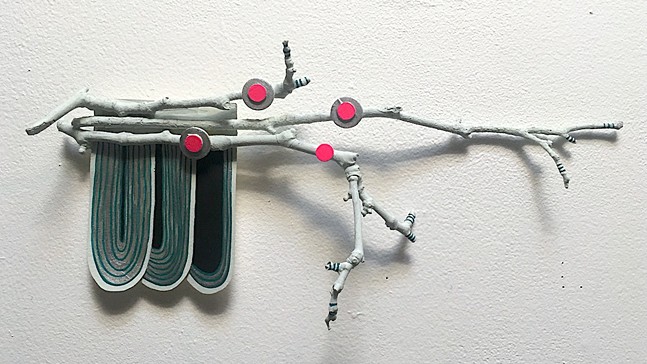 The gallery and arts marketplace will present its first-ever virtual exhibition on Fri., Jan. 29 with Which Craft, a dual show featuring works by Pittsburgh-based artist atiya jones and Suzanne Stroebe of San Francisco. A press release says the two women will “explore form, color, and mark making” through their respective styles.

“They both play with ideas of ritual, pattern, and form in cool ways,” says CDCP Project Space founder Casey Droege, who curated Which Craft with David William. “And visually, their work also plays off of each other really well.”

A description goes on to say, “While their personal approaches to their crafts differ, they often share formal concerns, and their works exist on two parallel wavelengths. Using ritual and a deeper sense of story, they bring magic to the surface in their practices.”

“Suzanne's creating really colorful, textured sculptures out of mixed media that hang on the wall. atiya is known for making intricate, organic line drawings, which we thought would work nicely,” says Droege. “But when [jones] showed us her newest body of work which shifts patterned paintings into objects, we knew it had to be in the show. Together, the work creates a space for introspection while also allowing moments of refreshing playfulness.”
click to enlarge


Droege says that, while going virtual is not their “preferred way to experience the exhibit,” it was the best option given the circumstances. While the gallery has tried to offer as many virtual activities as possible, over 70% of their art sales still happen in person at their Small Mall locations in Wilkinsburg and Lawrenceville, according to Droege. Despite this, she and her team decided to close CDCP Project Space in response to news of a more contagious strain of COVID-19 spreading throughout the U.S., and because of slower foot traffic in the winter.

This marks the second time CDCP Project Space has had to shut its doors since the first statewide shutdown in March 2020 required non-essential businesses to close for a period. CDCP Project Space did reopen later on Aug. 29, 2020.

Droege adds that they were fortunate to obtain a grant for the exhibit from The Opportunity Fund, but says more needs to be done on multiple levels to keep artists and arts spaces going.

“It's an understatement to say that I feel abandoned by the government,” says Droege. “My team and I need to make money, we want to pay artists, and we want to provide art opportunities for our community. … But over the last few months, we've had to self-isolate multiple times because of potential exposures. We've scrambled to keep things open while keeping ourselves and visitors safe. It's exhausting.”

Droege still wanted to enhance the experience of viewing Which Craft by adding an enticing element to the show — cheese, specifically a plate curated by Chantal's Cheese Shop in Bloomfield.

“Cheese makes my world go round,” says Droege, who considers herself a regular patron of Chantal's.

CDCP Project Space
Painting by atiya jones for Which Craft
CDCP Project Space partnered with Chantal’s owner, Anaïs Saint-André Loughran, to offer a cheese plate as part of an artist conversation between jones and Stroebe happening Fri., Feb. 12 on Zoom. The plate, which Pittsburgh-based viewers can enjoy at home while watching the event, helps recreate the experience of going to a gallery opening or event, where cheese, fruits, and charcuterie are set out for guests.

The plate will include brie, cheddar, and sardo cheeses, sopressata, Quicos, dried apricots, grapes, and mini toast. Gluten-free and vegetarian options are also available. Guests can buy a cheese plate on the CDCP Project Space website, and pick them up on the day of the talk.

In addition to the talk, the artists will also offer a few one-on-one virtual studio visits for potential buyers of their work.Which Craft at CDCP Project Space. On view Fri., Jan. 29-Sun., March 7. Free. Online only. caseydroege.com

WQED's Cartoon Academy invites everyone to learn to draw cartoons