CP Photo: Kimberly Rooney 高小荣
Toaster trying to open the SunMed Cat Snacks container after eating four of them.
My cat Toaster is a little more than 10 months old. A grey tabby with white on his belly, chest, and all four paws, he’s the largest of his litter, weighing in at about 13 pounds depending on the day. He is spoiled, loves screaming at me, and enjoys playing with plastic forks and spoons.

Naturally, he was eager to try several CBD products made specifically for cats, but I wasn’t going to let him have all the fun. Neither of us have tried CBD before, so together, we tried five products, two pet products and three for humans, from local shops Hippie & French and the Bellevue location of Your CBD Store.

Smokin’ Salmon tincture, Hippie & French
This pet CBD tincture has an easy-to-use design. It comes with a 1 milliliter dropper, with each milliliter containing 10 milligrams of CBD. Markings down the side of the dropper make it relatively easy to determine the dosage. The entire 300 milligram bottle contains 30 servings of 10 mg each, although I decided to start Toaster off slow with .25 mL, or 2.5 mg of CBD.

Toaster unfortunately was not fond of the taste. I first tried administering the tincture directly into his mouth, only for him to spit it back up. I also coated several salmon-flavored treats with the tincture to see if he would be more willing to ingest it that way. He sniffed but did not taste, leaving me unable to fully observe anything other than Toaster’s picky palate.

CP Photo: Kimberly Rooney 高小荣
SunMed Hemp Broad Spectrum Vegan Gummy Bears and SunMed Cat Snacks from Your CBD Store.
SunMed Hemp Broad Spectrum Vegan Gummy Bears, Your CBD Store
Clear labeling was a relief for these fruit-flavored, sugar-coated gummies. The flavor was sweet, slightly sour, and just different enough from regular gummies that you would notice. When purchasing the gummies, there are options for dosage (5 mg or 10 mg) as well as the number of gummies per package.

Per a friend’s suggestion, I only had one, which, according to the packaging, contained 5 mg of CBD. While I did not feel a strong effect, I noticed a slight decrease in neck pain and stiffness, along with a slight mellowness and calm throughout the evening.

Moksha 50% Criollo Milk Chocolate, Hippie & French
The next product was also for humans, and while it was labeled vegan milk chocolate, it had a slight bitterness that made it taste closer to dark chocolate. The entire chocolate contains 20 mg of CBD, but it’s made to be broken into fourths. I started with a fourth, and after an hour, decided to eat the rest since I wasn’t feeling anything.

After another hour, I became slightly more aware of my arms. Thoughts such as “wow, those are my arms” floated through my head unbidden, but otherwise, I felt slight alleviation from my chronic neck pain.

SunMed Cat Snacks, Your CBD Store
Toaster was a huge fan of the SunMed cat snacks. The label says there are 5 mg per treat and recommends 10 treats for a 10-12 pound cat, but, concerned about giving Toaster too much, I gave him four treats to start. He scarfed them down, and 20 minutes later, he was perched by the windowsill, ears twitching and nose constantly sniffing.

Catnip makes Toaster more playful and energetic, and the CBD cat treats made him roam around the apartment, but it wasn’t to play with a new toy. Instead, he was on the prowl for a new lounging spot. His eyes seemed wider than usual for the duration of the effects, making him look like he was realizing things all afternoon. He screamed much less than the average afternoon, was more accepting of cuddles, and simply hung out in close proximity to me more than usual as I worked. 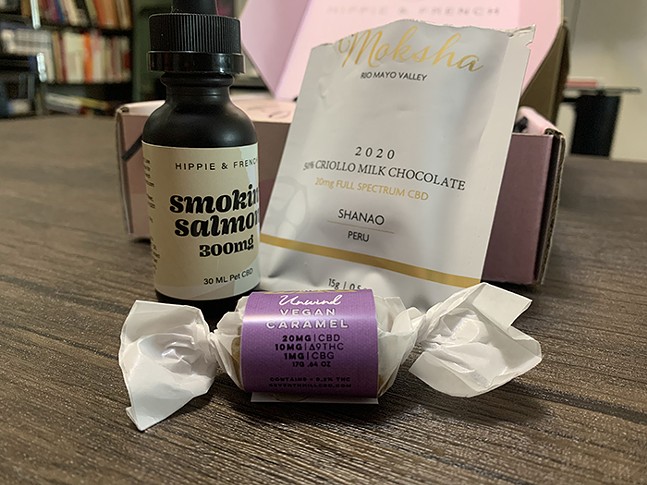 CP Photo: Kimberly Rooney 高小荣
Smokin’ Salmon tincture, Moksha 50% Criollo Milk Chocolate, and Seventh Hill: Unwind Vegan Caramel from Hippie and French.
Seventh Hill: Unwind Vegan Caramel, Hippie & French
A day after trying the chocolate with only slight effects, I ate half of the caramel, containing 20 mg of CBD and 10 mg of Delta-9 THC, according to the label. After about half an hour of not feeling an effect, I ate the other half. Then it hit … and it was six hours later.

More than the other products, the caramel had some unclear labeling. When I double-checked the label, I discovered that the inside of the caramel label listed its nutritional values at two servings per caramel. The dosage information, however, was outside of the nutritional facts box, leaving it slightly ambiguous just how much was in the caramel. Like the other Hippie & French products, there was a QR code on the label linking to a third-party lab report, but as a CBD newbie, I wasn’t quite sure what each number meant.

Still, had I not been in the middle of the workday, and wanted to feel out of sync with myself, this caramel would have achieved its purpose.
Hippie & French. 5122 Butler St, Lawrenceville. hippieandfrench.com