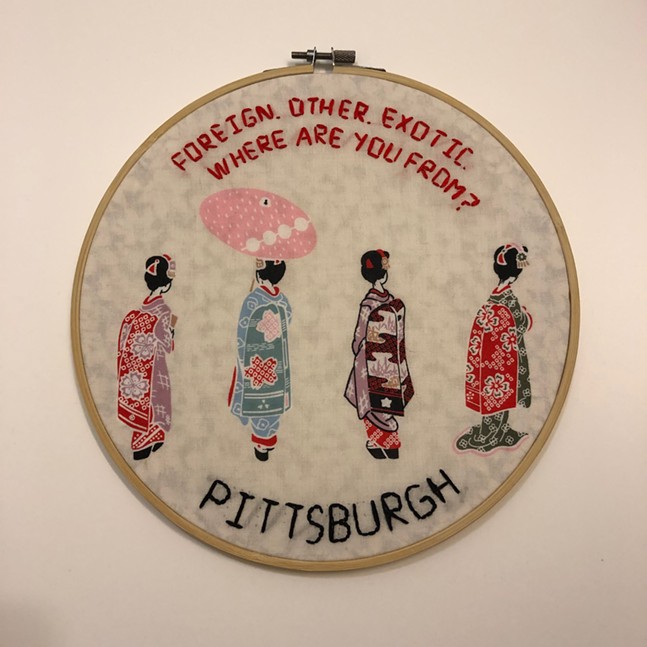 Pittsburgh Cultural Trust
Art by Patty Tran
A new exhibit in the offices of the Greater Pittsburgh Arts Council highlights a group of artists that have been historically underrepresented in the city. We Are Here: Asian Pacific Islander American Artists in Pittsburgh came together after the exhibit’s curator Karen Lue pulled together a show for the Lunar New Year at Everyday Cafe in Homewood.

The show, featuring 12 artists, is on display now through December, and available for view during the July 12 Cultural District Gallery Crawl, or by appointment. The project is also part of GPAC’s Art on the Walls program, which encourages local office spaces to purchase and display art by local and emerging artists.

“I think all the artists have very different work and a lot of it does explore themes of identity, but really I wanted it to be just a platform, just to uplift Asian Pacific Islander American artist's work, just cause this really hasn't been done before, just to give a place to represent them,” says Lue. She notes that there have been zero—or at least very few—exhibits in Pittsburgh featuring exclusively Asian Pacific Islander American artists.

The art in the exhibit is mostly two-dimensional, since it’s meant to be displayed in a future office space, but includes an array of mediums, including painting, collage, embroidery, and textiles. A group of four pieces by Eriko Hattori features bright, satin fabric framing sensual and abstract paintings of people, animals, and plants. An embroidery piece by Patty Tran that features four women with text that reads “Foreign. Other. Exotic. Where are you from?” In a cartoon drawing by Estelle Tian, a girl holds a sign that says “Yellow peril supports Black power.”

Lue says getting the word out about the call for submissions was the hardest part. While she doesn’t work full time as a curator, she’s involved in the local art scene and created a Facebook group for Asian Pacific Islander American artists in the city. She tried to make sure she got artists from a variety of backgrounds and was happy to have ended up mostly with artists she’d never worked with or heard of before.

The title of the show serves as both an assertion and a reminder that Asian Pacific Islander Americans have existed in Pittsburgh for over a century, and deserve to take up space in the art world like everyone else.

“We are definitely an underrepresented group cause we've never really had a space and a place to show our work in this way,” says Lue. “I wanted the title to just capture that feeling and autonomy.”

We Are Here at the Greater Pittsburgh Council for the Arts. Open during the July 12 Gallery Crawl, 5:30-8 p.m. Continues through December. 810 Penn Ave., Downtown. greaterpittsburghartscouncil.com