Cat on a Hot Tin Roof at The Summer Company

Instead of the idea of emotions boiling just under the surface, we get loud. 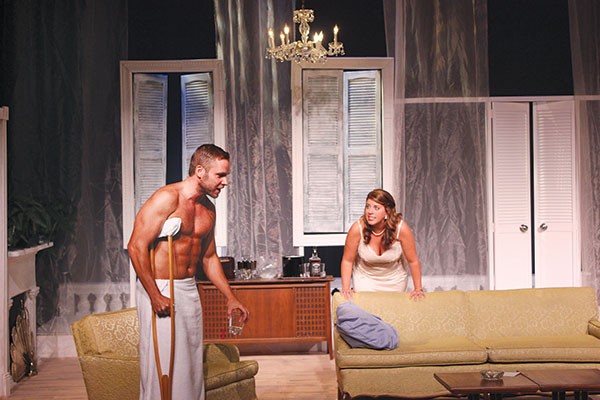 Curt Wooton and Cassandra Hough in Cat on a Hot Tin Roof, at The Summer Company.

CAT ON A HOT TIN ROOF

Give the Summer Company an A for ambition in tackling Tennessee Williams' masterful Cat on a Hot Tin Roof. The 1955 Pulitzer Prize-winner is still a sizzler, with words one does not use in polite company even after decades of Williams' tweaks and revisions. Alas, this romp through the Seven Deadly Sins (avarice, lust, envy, greed, pride, sloth and gluttony, for those keeping score) is less sultry, more desultory.

OK, Cat is a very difficult play, with long monologues and accents ready to trip up any actor, and a multi-layered text with bewilderingly complex characters. But director Justin Sines seems to have mistaken volume for passion. Instead of the idea of emotions boiling just under the surface, we get loud. And the pace, the dramatic buildup, is as torpid as the Pollitt family plantation on this hot summer night in mid-century Mississippi.

As the powerful Big Daddy, John E. Lane Jr. (also a Company founding producer) explores the nuances of the giant to be toppled, bringing warmth to the coarsely written patriarch. Suitably countering him, as his long-suffering if dim wife, Susan McGregor-Laine portrays a pillar of loyalty and unrequited love. (Williams' women do tend to be masochistically dog-like in their devotion.)

Speaking of unrequited, the youngsters have more difficulty in interpretation. Cassandra Hough shoulders much of her burden as the title character, but is more tame than tigerish. Curt Wootton seems to have taken his character's name, Brick, somewhat literally. He certainly looks the Prodigal Son role, but where's the spit and the spite? Satisfyingly nasty are Michael McBurney and Jill Jeffrey as the "good" son and his witch of a wife.

Sines' Cat looks great. Lane's appropriately spare set is as transparent as the Pollitts' many mendacities. Points also to lighting by Dale Hess, sound by Alexis Jabour (who's also stage manager) and costumes by Sarah Murtha and Spotlight Costumes.

The ending is more melodramatic murk than Williams' original bleak vision, but count this as a chance to see Cat on stage, where it belongs, and suffer the flaws to indulge in the playwright's language.