The rise and fall of "super lobbyist" Jack Abramoff 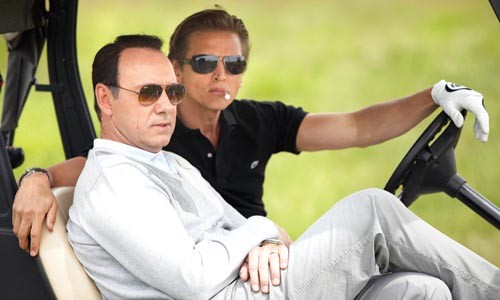 When "super lobbyist" Jack Abramoff got caught peddling influence and lining his pockets, there was speculation that the related worlds of President Bush and his Republican buddies would get busted open. Didn't really happen.

Casino Jack catches us up with the last two years of Abramoff's ride, as Jack (Kevin Spacey) and his partner Mike Scanlon (Barry Pepper) bilk Native American casinos, shoehorn in on a dodgy floating casino deal and ratchet up debts.

It's tricky to make a truly engaging comedy out of back-room deals between suits, but director George Hickenlooper gives it a go. With exaggerated performances, zippy first-person voiceovers and snazzy '60s-style lounge jazz, Casino is reminiscent of Steven Soderbergh's The Informant!, which covered similar turf.

But while it's breezy and fun -- and Spacey is always enjoyable to watch -- Casino never quite shows what makes Abramoff run. He's ambitious, aggressive, self-deluded, self-serving -- a player in a power tie -- but who isn't in Washington? The best of these inspired-by-true-events stories deliver some universal truth – a window into the human soul, illuminating that bit of character that both propels and undoes the striver. Casino Jack falls shy of both what makes Jack a bad boy, and how the system let him run amok. Starts Fri., March 11. Manor