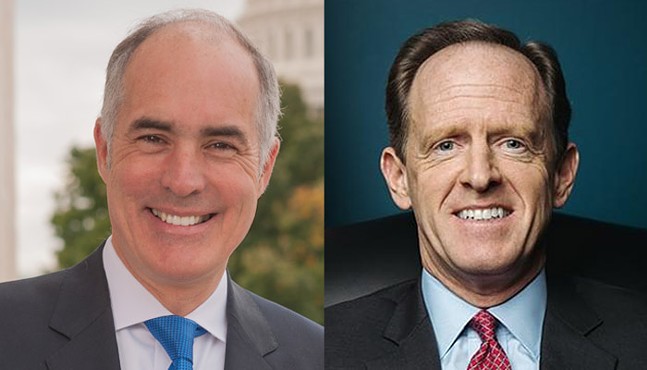 Bob Casey and Pat Toomey
The U.S. Senate voted on Saturday to acquit former President Donald Trump on a charge of inciting the deadly Jan. 6 insurrectionist attack on the U.S. Capitol, concluding his second impeachment trial with the same verdict as his first impeachment.

In the 57-43 vote, seven Republicans joined every Senate Democrat, including Pennsylvania's Bob Casey, and independent in support of convicting Trump.

In the evenly divided Senate chamber — which has 48 Democrats, two independents who usually vote with them, and 50 Republicans — it would have taken at least 17 Republican senators voting for conviction to reach the required two-thirds vote.

The Republican Party of Louisiana slammed Cassidy after the vote. “We condemn, in the strongest possible terms, the vote today by Sen. Cassidy to convict former President Trump. Fortunately, clearer heads prevailed and President Trump has been acquitted of the impeachment charge filed against him,” the party tweeted.

Two of the Republicans who voted to convict, Burr and Toomey, have announced plans to retire next year. Three others, Collins, Cassidy and Sasse, were re-elected to a new six-year term in November.

Toomey, a Republican from Lehigh County, told reporters after the vote that he did not make up his mind until after hearing the arguments. He said Trump’s actions leading to the second impeachment will form his legacy.

“He’ll be remembered throughout history as the president who resorted to non-legal steps to try to hold onto power,” Toomey said.

“President Donald Trump’s defense team made several accurate observations at the impeachment trial. Many elected Democrats did want to impeach President Trump from the moment he won the 2016 election. The mainstream media was unrelentingly biased and hostile to the president. Both often overlooked violent riots when perpetrated in favor of causes they found sympathetic last summer.

“However, these facts do not make President Trump’s conduct in response to losing the 2020 election acceptable. He began with dishonest, systematic attempts to convince supporters that he had won. His lawful, but unsuccessful, legal challenges failed due to lack of evidence. Then, he applied intense pressure on state and local officials to reverse the election outcomes in their states.

“When these efforts failed, President Trump summoned thousands to Washington, D.C. and inflamed their passions by repeating disproven allegations about widespread fraud. He urged the mob to march on the Capitol for the explicit purpose of preventing Congress and the Vice President from formally certifying the results of the presidential election. All of this to hold on to power despite having legitimately lost.

“As a result of President Trump’s actions, for the first time in American history, the transfer of presidential power was not peaceful. A lawless attempt to retain power by a president was one of the founders’ greatest fears motivating the inclusion of the impeachment authorities in the U.S. Constitution.

“I was one of the 74 million Americans who voted for President Trump, in part because of the many accomplishments of his administration. Unfortunately, his behavior after the election betrayed the confidence millions of us placed in him.

“His betrayal of the Constitution and his oath of office required conviction.”

Taking to Twitter in the hours before the vote, Sen. Casey (D-Scranton) observed that “impeachment is about protection, not punishment.”

In a statement after the vote, Trump blasted the impeachment process as “yet another phase of the greatest witch hunt in the history of our country,” and said that the movement he created “has only just begun.”

“We have so much work ahead of us, and soon we will emerge with a vision for a bright, radiant, and limitless American future,” Trump said in the statement.

Saturday’s impeachment vote in the Senate followed several hours of closing arguments, which were delayed when House impeachment managers sought to subpoena at least one witness. That call for witnesses cleared a Senate vote, but was later dropped when both sets of lawyers agreed to add to the trial record a written statement by Rep. Jaime Herrera Beutler, a Washington Republican.

Herrera Beutler had tweeted about a conversation she had with House Minority Leader Kevin McCarthy (R-Calif.), in which he told her about speaking by phone with Trump during the Capitol mayhem. She said McCarthy described Trump as siding with the rioters over lawmakers as the violence was unfolding.

Trump was charged with inciting the violent mob that lay siege to the U.S. Capitol on Jan. 6, which disrupted the tallying of presidential Electoral College votes and resulted in five deaths, including a Capitol Police officer.

The arguments for and against convicting Trump were outlined over just five days this week.

Using graphic videos of the riot, previously undisclosed security footage, and clips of Trump’s speeches, the nine House lawmakers who served as prosecutors argued that the insurrection was the foreseeable result of the former president inflaming and encouraging his supporters not to accept the election results.

“President Trump must be convicted for the safety and security of our democracy and our people,” Rep. Jamie Raskin (D-Md.), one of the managers, said.

Trump’s defense team argued that the House impeachment managers misconstrued Trump’s words, and that his calls for supporters to “fight” were no different from similar rhetorical calls from Democrats.

“In short, this impeachment has been a complete charade from beginning to end. The entire spectacle, a spectacle, has been nothing but the unhinged pursuit of a long standing political vendetta against Mr. Trump by the opposition party,” Trump attorney Michael van der Veen said.

After the vote, Republican senators who opposed conviction also blasted the impeachment process, while Democrats said they were taking necessary action against a president who they said violated his oath of office.

“The real purpose of this trial was to tar and feather not just the rioters, but anyone who supported the former President and any Senator who refuses to vote to convict,” said Sen. Marco Rubio (R-Fla.) in a statement.

“Our greatest loyalty as Americans is to our Constitution and the freedoms and protections she provides us; elected officials swear a solemn oath to uphold and defend our Constitution,” said Sen. Krysten Sinema (D-Az.) in a statement. “Former President Donald Trump betrayed his oath willfully, as no president has before.”
Laura Olson covers the nation's capital as a senior reporter for States Newsroom, a network of nonprofit outlets that includes Pennsylvania Capital-Star, where this story first appeared.