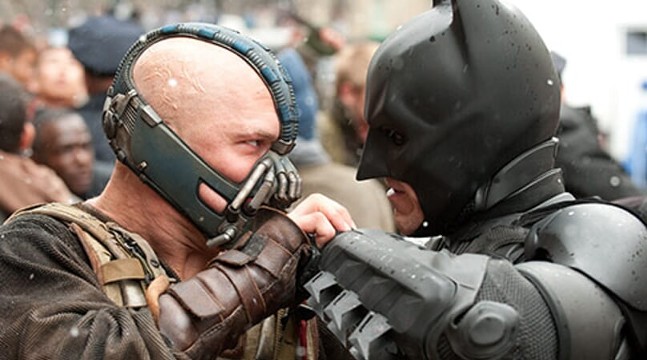 Image: Warner Bros. Entertainment Inc.
The Dark Knight Rises will play at Carrie Carpool Cinema
The pandemic has forced many arts organizations to think outside the box in order to entertain without risking an outbreak. This includes Rivers of Steel, the group responsible for organizing events at the Carrie Blast Furnaces in Rankin. Last year, Rivers of Steel presented art shows and other happenings at the former industrial site, including Carrie Carpool Cinema, a drive-in style series that allowed audiences to view films outdoors in the safety of their vehicles. Now Carrie Carpool Cinema will return to the Carrie Blast Furnaces with another round of screenings starting this spring.

Carrie Carpool Cinema will project a variety of films at the Carrie Blast Furnaces site from mid-April through the end of October. The screenings will take place one weekend a month and represent a wide range of genres from martial arts and animation to horror for the Halloween season.

Carly McCoy, director of marketing and sales for Rivers of Steel, says the return of the series is due to a successful run in 2020 when many screenings sold out.

"The success of the Carrie Carpool Cinema last season was exciting," says McCoy. "It proved to be a safe, family-friendly activity for folks throughout the region, a fun drive-in experience that really resonated with people—and in the process, it introduced many new audiences to the Carrie Blast Furnaces as a historic landmark and to the other programs offered by Rivers of Steel."

Carrie Carpool Cinema kicks off with movies shot in and around Pittsburgh, starting on Fri., April 16 with the award-winning, big-screen adaptation of local playwright August Wilson’s Fences. This will be followed on Sat., April 17 with the superhero blockbuster The Dark Knight Rises.

Both screenings will be preceded with shorts by celebrated local filmmaker Tony Buba.

McCoy says that for 2021, Rivers of Steel added activities complementing each batch of films to "make that experience even more rich while strengthening the connection to our mission."  For example, the Samurai Street Art weekend taking place from Fri., May 21- Sat., May 22 will pair pre-screening live graffiti mural painting and a DJ set with the featured films: director Jim Jarmusch’s Ghost Dog: the Way of the Samurai and Fearless starring Jet Li.

Also included are two weekends of 80s movies and stop-motion animation features for the whole family, the baseball-themed American Pastime weekend, and Heavy Metal Menagerie, an event that caters to music and metal lovers with screenings of Wayne's World and Mad Max: Fury Road along with a special hot metal mold workshop.

The series concludes with a Classic Horror weekend in October showing the1935 film The Bride of Frankenstein and John Carpenter's hit The Thing.

While Carrie Carpool Cinema came about because of COVID-19, it may become a permanent part of Rivers of Steel's offerings.

"It's our hope that the appeal is enduring, even after the pandemic begins to subside," says McCoy.

Tickets for Carrie Carpool Cinema cost $12 for adults and $8 for kids, with $3 of each ticket going towards supporting the conservation of the Carrie Blast Furnaces.