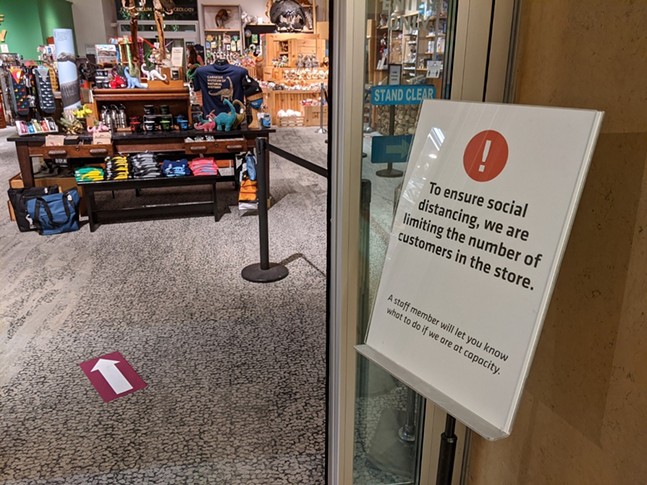 CP photo: Amanda Waltz
Social distancing signage outside the Carnegie Museum of Natural History gift shop
Workers from across all four of the Carnegie Museums of Pittsburgh have taken another major step towards unionization by voting to join the Pittsburgh-based United Steelworkers union.

Yesterday, it was announced that the United Museum Workers, a group that includes 500 scientists, educators, art handlers, gift shop clerks, and other staff members from Carnegie Museums of Art and Natural History, The Warhol Museum, and the Carnegie Science Center,  officially became part of the USW.

“We are thrilled to become members of the strong and diverse labor union whose founding members helped to build the fortune of our museum’s namesake,” says CMOA associate registrar, Gabi DiDonna, in a press release. “We look forward to having a seat at the table and a voice in the decisions that affect our quality of life both on and off the job.”

The group first announced its intent to unionize with a rally in June and filed for a union election to join the USW in October. The USW represents 850,000 workers in North America across a variety of industries.

Union members have cited the COVID-19 pandemic as a major reason for organizing. Aiyana Kachmarek, a gallery attendant at the Warhol, says that museums reopening during the crisis, and forcing staff to return to work, was “bringing to light on-the-job health and safety concerns that some workers may not have considered before.”

As for the United Museum Workers, Chloe Deardorff, a program presenter at the Carnegie Science Center, says, “Our goal is to build the best, most welcoming, and safest museum system for workers and for the people of the Pittsburgh area. The best way to do that is through collective action. We look forward to sitting down and bargaining a first contract that helps us to reach those goals.”