Andrew McAfee, Carnegie Museum of Natural History
Skeletal reconstruction of the adult oviraptorid showing preserved bones (in white)
The paleontology world welcomed a new first when a multinational team in China announced the discovery of a dinosaur preserved sitting on a nest of eggs containing fossilized babies. And, some of the team members are from the Carnegie Museum of Natural History in Pittsburgh.

A press release says the fossil belongs to a member of the oviraptorosaur family, a bird-like theropod dinosaur from the Cretaceous Period. The specimen, described as an “incomplete skeleton of a large, presumably adult oviraptorid crouched in a bird-like brooding posture over a clutch of at least 24 eggs,” was recovered in Ganzhou City in southern China’s Jiangxi Province. Of the 24 eggs, at least seven contain bones or partial skeletons of unhatched embryos.

“This kind of discovery — in essence, fossilized behavior — is the rarest of the rare in dinosaurs,” says Lamanna. “Though a few adult oviraptorids have been found on nests of their eggs before, no embryos have ever been found inside those eggs. In the new specimen, the babies were almost ready to hatch, which tells us beyond a doubt that this oviraptorid had tended its nest for quite a long time. This dinosaur was a caring parent that ultimately gave its life while nurturing its young.”
click to enlarge 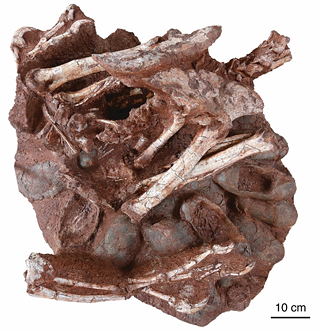 
The discovery was outlined in a scientific paper recently published in the journal Science Bulletin. The paper was co-authored by Shundong Bi, professor at the Indiana University of Pennsylvania and research associate at CMNH, and includes illustrations by museum scientific artist Andrew McAfee.

Xing Xu, a paleontologist at the Institute of Vertebrate Paleontology and Paleoanthropology in Beijing, also served as a primary author on the paper.

Bi adds that “This is the first time a non-avian dinosaur has been found, sitting on a nest of eggs that preserve embryos, in a single spectacular specimen.”

The species is related to the Anzu wyliei, aka the “Chicken from Hell,” a North American oviraptorosaur subgroup first discovered in 2014. An example of one is currently on display in the museum.

According to the journal Science, the name oviraptorosaur means “egg-thief lizards,” because researchers originally assumed the creatures ate the eggs that they were so often found with. Scientists now realize the animals were nesting, not feasting.

Besides being an extraordinary discovery, the specimen also provided a wealth of new insight for the researchers, including that some eggs were laid at different times, and that oviraptorids may have deliberately swallowed stones to help with digestion, as indicated by a cluster of pebbles found in its abdominal region.

“It’s extraordinary to think how much biological information is captured in just this single fossil,” says Xu. “We’re going to be learning from this specimen for many years to come.”