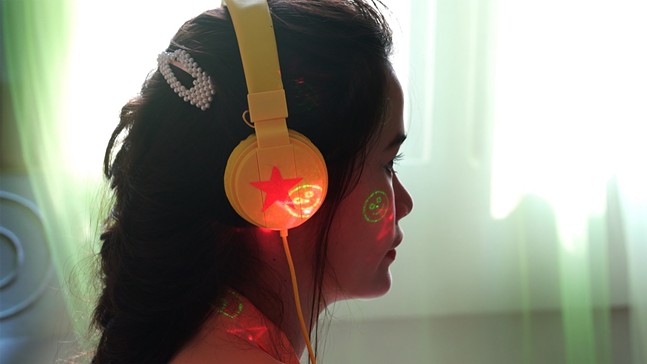 On view through March 27, 2022, Locally Sourced is described in a press release as highlighting “new work by some of the region’s most talented artists and makers of functional goods and furnishings.” Organized by Alyssa Velazquez, curatorial assistant for CMOA's Decorative Arts & Design, the show includes work by 19 local artisans, including designers like Knotzland, Ashley Cecil, and Idia’Dega, a company owned by award-winning Pittsburgh City Paper columnist Tereneh Idia.

Photo: Nathan J. Shanlis
"three bowls" by SPACAPAN, part of Locally Sourced at CMOA
Also on view are 3-D printed work by Building Bytes, functional ceramics by Reiko Yamamoto, and handcrafted lighting fixtures by KerfCase woodworking studio and SPACAPAN, among many others.

In addition to the exhibit, the museum has a pop-up shop stocked with items made by the Locally Sourced artisans.

The CMOA also expanded its permanent collection by acquiring Tyrant Star, a 2019 short video work by Los Angeles-based artist, cinematographer, and photographer Diane Severin Nguyen. The work is now on view as part of the first-ever online exhibition series dedicated to the museum’s film and video collection.

On view through Feb. 14, 2021, Tyrant Star is a 16-minute, single-channel video work set in and around Ho Chi Minh City, Vietnam. The film, which combines spoken word poetry and American pop music with footage of the sprawling Vietnamese metropolis, is described in a press release as examining “themes of disconnection and communication, which take on amplified meaning in our era of social distancing.”

“The museum’s collection is a growing entity open to embracing dynamic new practices and works happening today,” says CMOA's curatorial assistant for Modern & Contemporary Art and Photography, Hannah Turpin. “Diane Severin Nguyen is a rising star in photography and video who brings an astute sensory sensibility to her practice. Her ability to layer historical references and cultural touchstones with present-day perspectives captures how artists play a critical role in responding to the various life forces shaping our world.”

The film, which premiered at the 57th New York Film Festival in 2019, unfolds over a three-act structure, and depicts, among other things, a young Vietnamese woman recording a cover of the hit Simon & Garfunkel song “The Sound of Silence” and children in an orphanage on the outskirts of Ho Chi Minh City.

“Tyrant Star was a way to 'widen the angle' and suggest a historical and political context for my photographic work,” says Nguyen. “Of course it was deeply personal, since my family is Vietnamese, but I wanted to talk about identity without using a clear method of ethnography or narrative. Mostly, I wanted to draw connections between images and materialities.”

She expands on the film's connection to the Vietnam War, which she says “shaped bodies through certain advancements in technology; not only through Agent Orange which defoliated the land and seeped into bloodstreams, mutating actual bodies, but also through the widespread use of the 35mm camera, which crafted images of 'Otherness.'”

Photo: Carnegie Museum of Art
Tyrant Star by Diane Severin Nguyen
This reflection on Vietnam War-era history also comes through in the use of “The Sound of Silence,” which Nguyen says was “memorialized as this '60s protest song,” but in actuality was “more pop-oriented and not particularly political.”

“The song, for pro-peace Westerners, spoke of the Vietnamese subject in a very peripheral way,” says Nguyen. “The anti-Vietnam war movement only knew how to look at the Vietnamese body sympathetically, as a body deformed by war. My intention was to have this peripheral subject speak the same text and possibly activate it in a more layered way. The recognizable and shared space of the pop anthem presented an opportunity to subvert a dominant point of view and hierarchy of time. Also, I think I just really relate to the sadness of the lyrics and the story they tell about the impossibility of communicating.”

Besides adding a new voice to the museum's collection, Tyrant Star also continues the museum's mission to bring art to the masses in a time of crisis. In addition to being able to watch Tyrant Star for free on the museum website, there will also be a virtual conversation with Nguyen and Turpin on Wed., Dec. 16.

“We are all looking for opportunities to be inspired and find solace and comfort during this challenging time,” says Eric Crosby, Henry J. Heinz II Director of the CMOA. “In order to serve our visitors in new ways that are meaningful to them, we must fundamentally rethink the traditional museum experience. Regardless of whether our doors are open or closed, there should be countless opportunities for our digital audiences to experience and interpret art.”