“Every week is different; this last week’s topic was about Star Wars.” 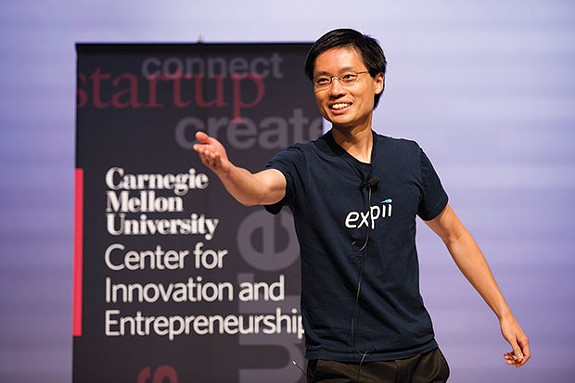 Carnegie Mellon University math professor Po-Shen Loh wants everyone with internet access to think about math as much as they can. His new free website Expii crowdsources math problems and solutions from students, teachers and math enthusiasts from around the globe. Expii gives users the ability to explore math through real-world and pop-culture problems, like which artists will win the most music awards, how one makes a bigger Death Star, and how self-driving cars can improve travel times. Loh, who is also the coach of the USA International Math Olympiad Team, heads a small Expii team in a nondescript office in Oakland. Users can visit at www.expii.com.

Why did you start Expii?

I have been trying to popularize mathematics as not just a thing that you do in school, but something you do to really understand the world better, in a really practical way. We can use math to find some surprising insights in the real world. … Every week, I sit down and meditate on some topic in the real world and try to see if there are any surprising math insights there — thinking about a real thing as a mathematician, in contrast to just thinking about mathematical theory. Every week is different; this last week’s topic was about Star Wars. ... Another one was the American Music Awards. There was this question — who is winning these things? Actually, it turns out there is a really strong correlation between the winners and how many Instagram followers they have. Which is what you might expect, because it is fan-voting, but I myself was shocked at how huge that correlation was. I can almost predict who are going to be the top [winners]. This is what we do.

What kind of insights did you have about self-driving cars?

First, I want to say that I am not the first person to ever think of these things — I am just trying to popularize [ideas like these]. I have heard before that traffic is caused by people braking and accelerating, causing these waves of traffic. But there is another thing that fundamentally governs traffic. Take the Fort Pitt tunnel. …  Following distance is generally two to three seconds; this is because of human-reaction time. You can’t just follow [so close] because you can’t hit the brakes fast enough. ... This means only one car every two seconds can pass in each lane, or one car per second for the tunnel. That means the numbers of cars that can pass through the Fort Pitt Tunnel, no matter how fast they are driving or slow they are driving, is 3,600 [per hour]. That is real life. If your capacity of the tunnel is only 3,600 per hour, now you know why there is rush hour. I know that highway engineers know this, but now I was finally thinking about it in the same way.

Now, how does this factor into self-driving cars? The two-second following-distance reaction time is because of human-reaction time. As a human, I can only see the car in front of me; I don’t have this omniscient view of traffic five miles ahead. Now, imagine a huge network of self-driving cars; in fact, the value of the self-driving car is in this swarm-like network. Now suddenly, you don’t need that two-second following time. You can actually pack cars closer, and that is the only way to overcome this. If you allow a shorter following distance, we can break through this barrier of only 3,600 cars per hour. But the extreme case of this [already exists]; it’s the subway train. Take New York City, trains come every five minutes, with 10 cars, and each car can fit 150 people. That’s 1,500 people every five minutes, that’s 18,000 people an hour.

What do you hope to accomplish with Expii?

We are trying to help everyone in the world learn mathematics, where all they need is a smartphone. We are trying to deliver mathematics learning to the whole world for free. There are two ways to do this. One is to evangelize why mathematics might be worth doing in the first place. This is why I try to come up with these problems, so [users] too might want to come up with [mathematical] insights. The other part is to make it so you don’t have to pay. So [Expii] is an automatic virtual tutor, which lets you have a personalized road to learn mathematics. Ours is a learning platform where people have contributed towards the problems and mini-lessons, and so everyone shares in it together.