Carmody’s Grill on Neville Island keeps a beloved name and tradition alive, while ably adapting to 21st-century standards and preferences

The popular turtle soup is still on the menu 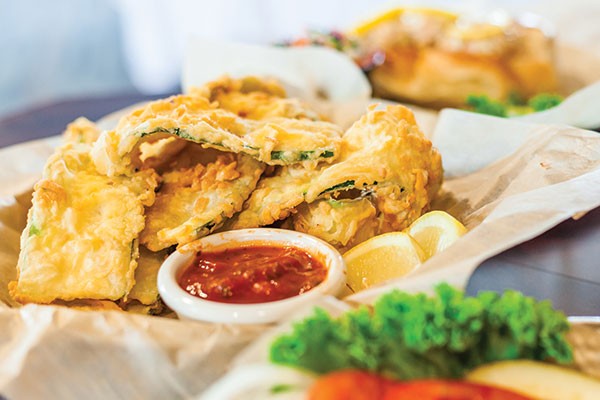 Carmody’s Restaurant and Lounge operated for 62 years in Franklin Park, becoming the kind of institution that served as an extension of home to its regulars, or was impenetrable to outsiders, depending on your perspective. Carmody’s served veal scallopini, iceberg-lettuce salads and prime rib, and was renowned for its turtle soup. When it ladled its last bowl, in 2014, longtime customers wept.

The two brothers who’ve opened Carmody’s Grill on Neville Island do not play to nostalgia; in fact, they’ve gone out of their way to present an updated appearance, complete with exposed brick, steel beams, chalkboards and barnwood. They’ve updated most of the menu, too, with items such as balsamic chicken flatbread and fish tacos. But a few things, along with the name (which rhymes with “comedy”), will be familiar to the turtle-soup crowd of yore.

First among these, in fact, is in fact, turtle soup. The Creole-style broth is thick and hearty, deep auburn in color with a glossy sheen; it had a tangy, mildly spicy flavor strangely — though not unpleasantly — reminiscent of Chinese egg-drop soup. The finely shredded turtle meat was, frankly, tough and stringy, and vegetables sparse, but we’d order this soup again for the delicious broth alone.

Another throwback, fried zucchini, was also pretty good. Broad planks were cut just thick enough to retain the zucchini’s vegetal character within a fluffy, crispy batter that coated lightly in some areas, but in others built up to a crunchy crust. This style isn’t unique, but we’ve rarely had it done so well. The marinara for dipping was a little overcooked for our tastes — we prefer something more brightly tomatoey with such a light vegetable — but the horseradish sauce had some real presence, and we appreciated that lemon wedges and a shaker of Parmesan were provided as a matter of course.

Beyond the soup, and befitting its new suffix, Carmody’s Grill serves mostly a straight bar menu of finger foods and sandwiches, although there are entrees: prime rib every night, plus two or three specials. We sampled the prime rib in a French-dip sandwich. The big Mancini’s roll — a golden-brown hoagie-style one — was an excellent choice, neither too crusty nor too insubstantial, and the jus was simply perfect. Jus is usually a failed balancing act between savory and salty, with robust beef flavor rarely keeping up with the punishing bite of sodium. But Carmody’s delivered clean beefiness in a clear jus so perfectly salted it was good enough to sip. Our only complaint about this sandwich — alas, a major one — was that there was not enough actual prime rib.

Our other meat sandwich, the eight-ounce steak-blend burger, delivered on its promise of big, beefy flavor. The kitchen overshot our order of medium rare, resulting in less juiciness than we’d hoped for, but the meat remained tender, and the bacon on top added chew and smoke without hiding the burger’s flavor. The pretzel roll was toasted, improving its texture so that it presented its patty well. For vegetarians, Carmody’s black-bean burger is a solid option. Its creamy, not-too-rustic texture played well with the buttery brioche bun, and dollops of mild tomato salsa and sour cream added tang and richness without actually pulling the flavors in a Mexican direction.

Meatloaf contained more loaf than meat, with bread binder creating a texture that was not exactly smooth, but nowhere near the crumbliness of a burger patty. There was good herbal flavor, though, and the edges had developed a nice crust for an appealing contrast to the center. The gravy was perhaps too thick, and the mashed potatoes were lumpy. While this wasn’t an issue for us, it’s not a universal preference.

Sides are a big part of the pub-grub experience, and Carmody’s acquitted itself well. Fries were standard pub-cut, but not especially greasy, and had a pleasing crispness at their edges. Onion rings appeared to be made with the same batter as the zucchini, with similarly pleasing results (although it worked best with the thicker rings; thinner ones got lost in the coating). And kudos to the kitchen for including “power slaw,” a hearty amalgam that incorporated au courant Brussels sprout slices and big hunks of red cabbage. But these items had traces of bitterness that a too-sweet dressing attempted to mask, rather than merely counterbalance.

Carmody’s keeps a beloved name and tradition alive, while ably adapting to 21st-century standards and preferences.