As many Pittsburghers are aware, the area’s Latino presence is far from extensive. The Pittsburgh region has one of the lowest percentages of Latino residents of any large metro area in the country. Unfortunately for Mexican food and drink lovers, this means a dearth of their favorite treats.

But, on the alcoholic-beverages front, things are looking up. Canned Cheledas have been popping up at several locations where beer is sold in the Pittsburgh region. 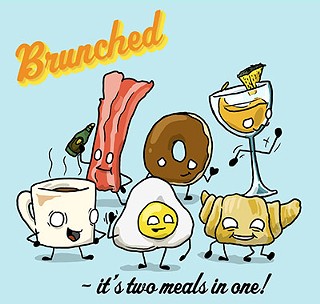 Click for more info on City Paper's upcoming Brunched event!
The canned beverage is a version of a michelada, which is a mix of beer (typically lager), salt, lime juice, and spices. The canned versions available in Pittsburgh all also include tomato juice. They are a lot like a Bloody Mary but much more drinkable and delicious on a hot day. Canned Cheladas are extremely popular in Mexico, California, the American Southwest, and just about any place where a lot of Latinos (especially Mexican-Americans) live in large numbers.

Cheladas’ alcohol content is usually low, below four percent ABV. People might not think anything with tomato juice is refreshing, but the juice really just balances out the lime, salt, and beer which make Cheladas incredibly easy drinking.

Americans of all backgrounds have warmed to these drinks so much that Budweiser and Bud Light now both produce Cheladas.

In Pittsburgh, Modelo appears to be one of the most widely available, with both a regular and spicy version made with tamarind and chipotle peppers. The regular is not too salty, has just a hint of lime and a good mix between lager and tomato juice. If you like tomato juice and want something extremely drinkable, Modelo Chelada is superb.


Picked this up at the GetGo.

Pittsburgh, we’ve made it. pic.twitter.com/B59pdjCaTx

Sol Cheladas, which just launched in the U.S. in February, are also available in Pittsburgh (try the GetGo on Baum Boulevard in Bloomfield). The Sol version is made with tomato juice, beer, lime, salt, spices, and also a little clam juice. The lime and salt are noticeable up front and pack a wallop. The flavors are pretty intense. If you are a bit more hesitant of tomato juice flavors, this is your brand.

Canned Cheladas are available at many beer distributors in Pittsburgh, including Beer, Lime & Sunshine in Downtown, Liberty Beer in Bloomfield, and Pistella Beer in Friendship.