Life is really just flipping the top card off the deck and making the best of what you got. 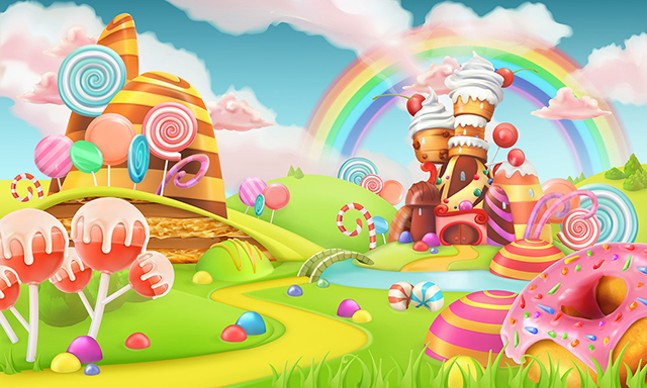 “The game requires no reading and minimal counting skills … there is no strategy involved: players are never required to make choices, just follow directions. The winner is predetermined by the shuffle of the cards.” – ‘Timeless Toys: Classic Toys and the Playmakers Who Created Them’ by Tim Walsh.

I was reintroduced to this diabolical game of chance after searching for a simple board game I could play with my kids, which would be their first. I gravitated toward fewer intricacies in gameplay, which meant fewer fights between easily distracted contestants. I fondly remembered whimsically traipsing along the fantastical map, lush with mouthwatering treats. What I didn’t remember was how painfully boring the game is.

Created in 1949 by an adult polio patient trying to entertain the children hospitalized alongside her, Candy Land combines a deck of cards with endless suffering. Pick the top card from the deck and DO AS YOU’RE TOLD! Reveal a blue block, move two steps to the blue space. Flip a card with two orange blocks, move to the second of two orange spaces. You're cruising now! Draw the gingerbread men. Sorry, your car’s been repossessed, your house foreclosed on and your candyperson is back at the beginning of the map. My kids love this game — probably the same reasons why the other million copies are sold. So we play.

The gameplay is harder for adults to swallow. There’s no strategy or planning involved. I’m not nearly as entertained as my kids by the prospect of ending up at the Peanut Brittle House, the Gumdrop Mountains, or the Lollipop Forest. I’m excited to pull the card that's going to get me to the end of this game in the most expedient way. It probably doesn’t help that I’ve never won. Screw you, Candy Land!

But the more I think about the game, the more I appreciate it. It actually mirrors life quite well. You’ll spend immense amounts of time and money on planning the perfect vacation; you’ll learn a marketable skill at an accredited institution; you’ll pore over that recipe for a delicious shrimp scampi; but the actual returns aren’t anything you have much control over. Your vacation could be ruined by rain. You may hate your chosen career. You may burn that dinner. Life is really just flipping the top card off the deck and making the best of what you got.

Candy Land isn’t as much about achieving a goal as it is learning how to weather the storm. And sometimes that storm gets more complicated when your kids can’t remember whose turn it is. Come on, guys. There’s only three of us playing.

There's much more work than sex in sex work