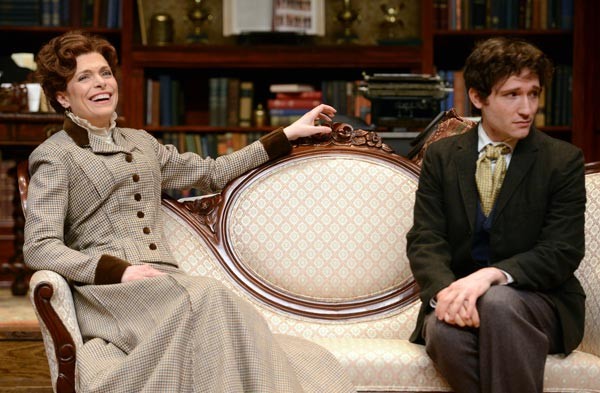 I was slightly worried going into Pittsburgh Public Theater's production of George Bernard Shaw's Candida. After all, Shaw never willingly passed up a chance to lecture his audience. And, too, in nearly three decades of reviewing I'd never seen Candida and, usually, there's a reason a play goes unproduced for 30 years.

I'm very happy to say that I exited the Public (before 10:30!) in a much more pleasant frame of mind, because Candida ends up being an Edwardian sitcom. (Who knew Shaw had it in him?)

The Rev. James Morell is upright, downright committed to his faith and his socialist politics. He loves his congregation and they love him back — especially the female parishioners and his secretary, Miss Prossie.

But these gals are barking up the wrong tree, because Morell is achingly in love with his loving wife, Candida. Then here comes Eugene Marchbanks, an intensely artistic young poet so profoundly enchanted by our title character he can barely speak in her presence. Two other characters appear as well, a curate and an industrialist; both are funny, but neither has anything to do with the story.

As with most sitcoms, a flimsy string of events brings us to the plot: Morell comes to believe that Candida might be in love with Marchbanks. To tell you the truth, it's not very plausible, and certainly the least interesting aspect of the evening.

What is interesting is the breezy and charming manner in which Shaw unspools the whole thing. It's a skillful, smartly crafted piece of puffery which is no less entertaining for its puffery-ness. I especially enjoyed the intelligence and savvy Shaw gives to Candida and the surprisingly contemporary relationship, considering when the play was written (1894), that she has with Morell.

It does get a little twee toward the end, and there is an unmistakable desire to kick Morell in the head, since he's the only one in a five-mile radius who thinks Candida might be looking elsewhere. But thanks to Ted Pappas' fleet and facile direction, it's hardly an issue; Pappas knows precisely when to push in and when to pull back to achieve maximum effect.

Gretchen Egolf is a fascinating presence as Candida, with a look in her eyes letting us know that she misses nothing and, when Shaw requires it, that she will reveal everything.

Playing the loony-tunes poet Marchbanks, Jared McGuire luxuriates in a loose-limbed physicality as telling as it is funny. It's the showiest role, and McGuire's more than up to the task. David Whalen's rock-ribbed sincerity as Morell goes a long way toward making this slightly contrived character believable, and his dawn of understanding at the play's end is quite moving. Contributing lots of fun in supporting roles are Meghan Mae O'Neill, Matthew Minor and John O'Creagh.

Also adding to the evening are James Noone's beautiful set and Andrew B. Marlay's attractive costumes.