Studies have shown marijuana can be an effective and safe drug to treat chronic pain, but getting doctors to recommend it over opioids is the next step 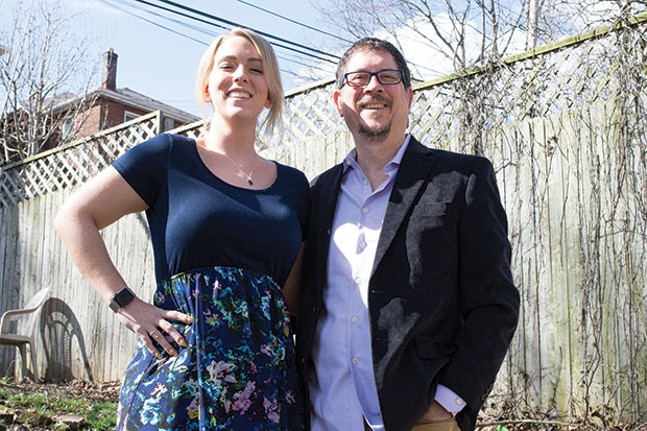 CP photo by Jake Mysliwczyk
Patrick Nightingale, with his wife, Teresa, are marijuana advocates who believe medical cannabis can reduce the number of opioids prescribed in the Pittsburgh area.

According to 2016 data from the Centers for Disease Control, of U.S. counties with more than one million residents, Allegheny County had the highest drug-overdose death rate. In 2016, Allegheny County lost about 50 lives to drug overdoses per 100,000 residents. These deaths were primarily caused by residents overdosing on opioids like fentanyl and heroin. And in 2017, according to the Pennsylvania Opioid Overdose Reduction Technical Assistance Center, the amount of overdose deaths in Allegheny County only increased.

But 2017 is also the year that patients in Pennsylvania have legal access to medical marijuana to treat some types of chronic pain. And medical-marijuana proponents believe the drug can be a game-changer in the fight against the opioid epidemic. Doctors, advocates and medical-marijuana business owners feel marijuana should be recommended after patients complete their regiment of prescribed opioids. They believe it is a safer way to manage chronic pain and can keep many people from getting addicted to opioids.

Preliminary studies back up this case, as states that have allowed medical marijuana as a pain treatment have seen some drop-off in opioid-related deaths. However, getting the Pennsylvania medical community fully on board may be a struggle, as marijuana as medicine hasn’t been studied as much as other pain-relieving drugs. But Pennsylvania officials recently passed a small change to the state’s medical-marijuana statute, which could encourage more doctors to recommend medical cannabis and hopefully keep patients from forming an addiction to opioids.    Dr. George Anastassov is the CEO of Axim Biotechnologies, a company focusing on the research and development of pharmaceutical products created from marijuana. Anastassov has a background in surgery and pain management, and is bullish on the idea that medical marijuana can be used to treat chronic pain.

Anastassov says opioids are still necessary to treat acute pain, or a short-term pain that resolves as patients heal. But, he says medicine derived from marijuana would be better suited to treat any longstanding pain that remains as a result of surgery or a traumatic event, also known as chronic pain.

“We are acutely aware of the opioid problem,” says Anastassov. “Opioids are here to stay, for acute pain, but not for chronic pain.”

Anastassov says historically many doctors prescribed opioids for chronic pain and were encouraged to do so by the large pharmaceutical companies that developed, studied and distributed opioids. He says this contributed to Pennsylvania’s growing opioid crisis, particularly in rural areas were medical options are limited. Anastassov recognizes other medicines can also replace opioids, but he believes medical marijuana is the best choice to help patients suffering from chronic pain. He says patients taking pharmaceutical cannabis products instead of opioids could play a role in keeping patients from developing addiction to opioids.

“I think pharmaceutical cannabis is the frontrunner,” says Anastassov. “We can dramatically reduce the number of opioids.”

Patrick Nightingale is a lawyer who represents clients with drug addictions and is the director of marijuana-advocacy group Pittsburgh NORML. He says many of his clients enter the criminal-justice system due to interactions with opioid-related drugs and, over the years, he has seen an increase in clients whose first interaction with opioids was a prescription for legitimate pain.

Nightingale believes providing patients with medical marijuana to deal with chronic pain could be a better solution. “For someone new to pain treatment, these are the type of people to steer to medical cannabis, instead of giving them two to three months of opioids,” says Nightingale. “We are going to see less people with opioid addiction if they have access to medical cannabis in early stage treatment.”

Anastassov agrees, but also says a pharmaceutical-cannabis chewing gum he is developing at Axim can help those already suffering from substance-abuse issues. He says the physical exercise of chewing helps people who are addicted, like how nicotine gum has been shown to help people quit smoking cigarettes. Anastassov believes a medical-marijuana chewing gum can help wean people off opioid addiction. The product has yet to hit the market, but Anastassov is confident Pennsylvania officials will welcome it as a way to combat the opioid crisis.

Nightingale says the biggest obstacle in treating Pennsylvania patients who would normally use opioids with medical marijuana, is convincing prescribing physicians to recommend cannabis. Marijuana is still a Schedule I drug under federal law, and Nightingale says this has limited the amount of medical studies completed on marijuana, which has increased doctors’ skepticism of marijuana as medicine.

But there has been progress. On April 9, Pennsylvania’s medical-marijuana advisory board broadened the definition of chronic-pain patients who qualify for access to medical marijuana. The decision still needs to be cleared by the Department of Health, but marijuana-advocate Chris Goldstein, of Philly NORML, says Pennsylvania physicians will be able to recommend medical marijuana as the first option for chronic pain, if the change is approved.

Dr. Adam Rothschild is thrilled about this news. Rothschild practices family medicine in East Liberty and is a certified to recommend medical marijuana through Pennsylvania’s medical-marijuana law.

He says cannabis is much safer than opioids in treating chronic pain, and it should be much higher on our list of chronic-pain medications. According to Rothschild, the current rule about recommending medical marijuana for chronic pain has a caveat that states “in which conventional therapeutic intervention and opiate therapy is contraindicated or ineffective.” With that caveat likely to be removed soon, Rothschild believes more prescribing physicians in Pennsylvania will be open to recommending medical marijuana.

“For the people worried about legal aspects of recommending medical marijuana,” says Rothschild, “this will make them more comfortable.”