Can John Welch rise above the circus surrounding the Pittsburgh mayoral election to be a viable challenger to Bill Peduto? | News | Pittsburgh | Pittsburgh City Paper

Can John Welch rise above the circus surrounding the Pittsburgh mayoral election to be a viable challenger to Bill Peduto?

“Welch’s campaign has been very much ignored in a lot of communities.” 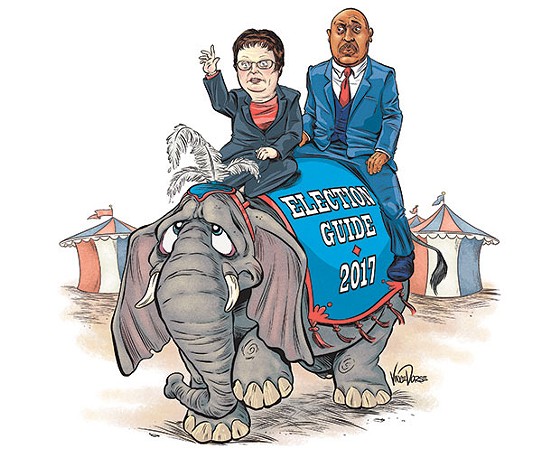 Last week, Pittsburgh Mayor Bill Peduto got some new neighbors after tents were erected next to his home in Point Breeze. While no one has taken credit for the demonstration, the stunt is believed to be in response to complaints from North Side residents over a homeless tent community in their neighborhood.

Some believe the demonstration was spearheaded by Pittsburgh City Councilor Darlene Harris, who represents the North Side and who is running against Peduto in the upcoming election.

“Councilwoman Harris is exploiting some of our most vulnerable neighbors,” Peduto said in a April 28 statement. “In Pittsburgh we proudly take care of each other and help our neighbors in need. These are human beings, not political pawns.”

The demonstration near Peduto’s home is just the latest spectacle in this year’s mayoral primary election, which pits Peduto against Harris and challenger Rev. John Welch. As a longtime opponent of the mayor, both Harris’ standing in government and her penchant for spectacle has overshadowed Welch who, while equally critical of the mayor, hasn’t garnered the same level of attention.

“Welch’s campaign has been very much ignored in a lot of communities,” says activist and former school board director Randall Taylor, a Welch supporter. “Harris is an interesting Pittsburgh figure; she’s well known. She’ll say provocative things and that’s always more interesting to some people.

“There’s an aspect of politics that is show business. She’ll say something wild and that’s always going to get more interest than someone who’s really trying to talk about issues. He’s not screaming and hollering; he’s not making outrageous statements, he’s just talking about policy.”

If the history of mayoral elections in this city have taught us one thing, it’s that a three-person mayoral race doesn’t bode well for the two challengers against the incumbent. However, Welch is contending against even greater odds. While much of the press surrounding Harris hasn’t been positive, the candidate has had far more news articles written about her this campaign season. Further hurting Welch’s campaign are complaints from progressives. While Welch is running to the political left of Peduto — highlighting the need for affordable housing and policies to fight poverty and uplift minorities — many liberals say the reverend’s social views aren’t those of a progressive candidate.

“You have Welch who has his housing and poverty agenda, which is important,” says Sue Kerr, an LGBT blogger and activist. “But he’s not really left if he’s not pro-choice, and we don’t know where he stands on LGBT issues.”

Ultimately, for Welch, the election will come down to whether he can put enough distance between himself and progressive Peduto — who many believe has earned his designation as the city’s most progressive mayor — and whether his message can rise above the circus surrounding Harris.

April was a big month for Harris in the media. It started with her failing to file a required campaign-finance report with the city’s Ethics Hearing Board. Later in the month, Pittsburgh City Paper posted a video of a driver, believed to be Harris, shouting at a cyclist. (The cyclist identified Harris as the driver, the voice on the tape sounds like her, and the vehicle is hers.) And perhaps the most headlines involving Harris came after she posted pictures of herself riding an elephant and camel at a recent circus here.