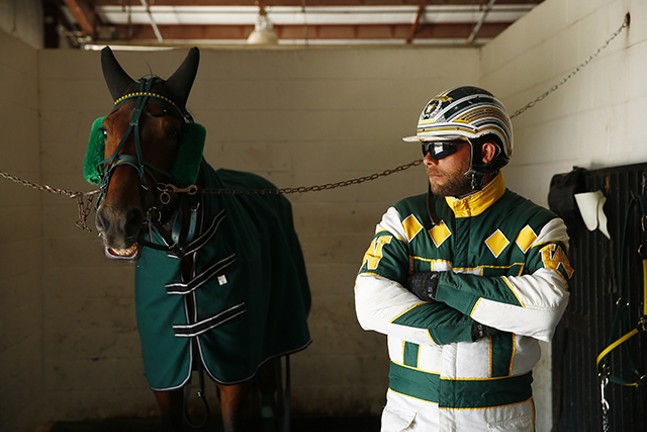 CP photo: Jared Wickerham
In the stables at The Meadows Racetrack & Casino
With the Kentucky Derby coming up this weekend, horse racing is making its annual pilgrimage to the front page, as millions of people place bets and make plans for the big day. The excitement, the grandeur, and the tradition of one of America’s oldest sports captivate many into watching the buildup to what is essentially a two-minute race.

But the excitement doesn’t come without controversy.

Horse racing still has a ways to go in terms of improving its reputation of drugging horses. In states without bans, horses are often drugged right before the race, which can increase the chances of animals getting hurt. Injuries often lead to horses being euthanized.

Thoroughbred horse racing is the biggest offender. Known for their speed, Thoroughbred horses run in the Kentucky Derby, as well as other well-known races. The Thoroughbred industry has been mired with controversy due to the use of Lasix, a drug that helps horses avoid nosebleeds caused by hemorrhaging during intense physical activity, allowing them to run faster for longer. But after 23 horses broke down and were euthanized over the course of three months at Santa Anita Park in California, all high-stakes Thoroughbred races agreed to phase out Lasix by 2021.

Standardbred horse racing, or harness racing, is less lucrative than Thoroughbred racing, but still draws a crowd at places such as The Meadows race track in Washington County, as well as other race tracks in Pennsylvania. This type of racing requires the horse trot instead of full-out run, all while pulling a small cart with a driver. Standardbred is not without doping, but the offenses aren’t as numerous compared to Thoroughbred racing.

A bill in the U.S. House hopes to change some of that culture, but it has so far failed to get the support of most of Pennsylvania's congressional delegation and the state’s biggest race organization, Penn National Gaming, which owns race tracks and casinos across the country and in Pennsylvania, including The Meadows and Penn National Race Course.

Advocates of the bill say the support of Pennsylvania is crucial to make into law, but will it gain enough support in the Keystone State?

Pennsylvania isn’t usually considered a major horse racing hub like Kentucky or New York, but Marty Irby of Washington, D.C.-based Animal Wellness Action says Pennsylvania is in the top 10 of horse racing states. There are six racing tracks in the commonwealth that hold Thoroughbred and Standardbred races, and some with some sizable purses.

Irby says Pennsylvania isn’t the worst offender when it comes to animal welfare issues, like drugging horses on race day, but it’s not a shining example either.

“Pennsylvania isn’t the worst, but it is really at the bottom at the barrel,” says Kirby. “You don’t have a presence there that seems to be willing to crack down on the abuses.”

According to horse racing news site Paulick Report, Pennsylvania hasn’t integrated the Association of Racing Commissioners International penalty system, which calls for long suspensions and harsh fines of up to $50,000 for repeat drug offenses. Instead, Pennsylvania offenders typically just have races disqualified and sometimes fines as low as $500.

Irby says problems in Pennsylvania are common in other states. With 38 different racing consortiums in the U.S., it is hard to get commissioners to agree on standard rules for drug testing. That’s why Irby is advocating for the Horseracing Integrity Act, a bill in Congress to create national rules pertaining to the horse racing industry, including standardized drug testing and creating a ban on race-day drugging.

The co-authors of the act are U.S. Reps. Paul Tonko (D-New York) and Andy Barr (R-Kentucky), and both represent districts with a large horse racing presence. The bill so far has gathered 50 co-sponsors, with only two from Pennsylvania, U.S. Reps. Brendan Boyle (D-Philadelphia) and Madeleine Dean (D-Montgomery). Race organizations like the Preakness and the Belmont Stakes are backing the bill, too.

Irby says for the bill to have a chance, more members of the Pennsylvania congressional delegation and Penn National Gaming need to lend support. Irby says since support for animal welfare is popular among Pennsylvania politicians, he expects more representatives to co-sponsor the bill.

A request for comment to Penn National Gaming was not returned.

In the end, Irby believes the bill isn’t just about the health of race horses. He thinks the bill will give confidence to horse racing fans that the sport is clean, and thus could boost its viewership.

“This is not a heavy lift for anyone at any track in America to support."