Can cities like Pittsburgh continue their progressive ways in Republican-controlled waters? 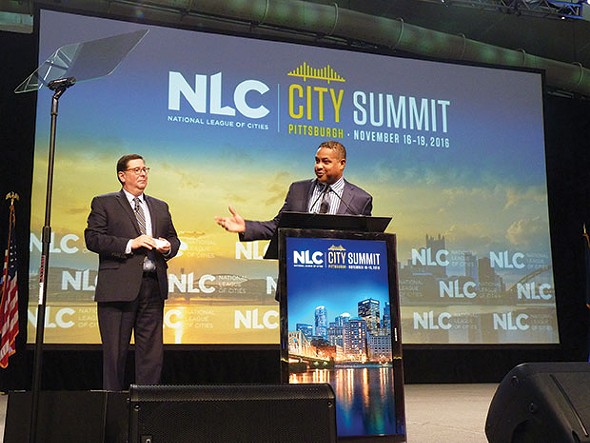 The day after the election that swept Republican Donald Trump into the White House, Pittsburgh Mayor Bill Peduto threw his speech into the trash. Peduto was set to address more than 3,000 city-government workers and elected officials during the National League of Cities conference taking place in Downtown Pittsburgh. With the surprising election result, he knew he needed a whole new angle.

So, on Nov. 17, at the NLC conference, Peduto spoke about transition. “Pittsburgh has gone through a major transition, just like most cities are going through transitions,” said Peduto, referencing the nearly 20 percent unemployment rate that plagued the city after the steel industry collapsed in the 1980s. “We lost more people than were displaced by Hurricane Katrina and they never came back, but people started planting seeds. Thirty years later, we are back.”

Since the collapse, Pittsburgh’s economy has diversified, and the city has become a national leader in innovative fields like health care and robotics. Pittsburgh has started championing new-wave progressive ideas like protected bike lanes, welcoming programs for immigrants and green-infrastructure projects.

And Pittsburgh is not alone. Many cities across the country have done what Pittsburgh is doing and more. Some have raised the minimum wage to $15 an hour; others have turned parking spots into micro public parks. And it seems the bigger the city, the more progressive it is. Of the nation’s 75 largest cities, about 80 percent of them have Democratic mayors, many of whom are promoting these ideas.

But in two months, the White House will be held by a man who won the presidency thanks to a surge of Republican rural and suburban voters, many of whom argued their rights have been imposed on by the progressive ideals now flourishing in cities. The GOP will control the White House, the U.S. Senate and the House of Representatives. Additionally, Republicans control two-thirds of the country’s state legislatures, and many have approved legislation attacking cities that pass progressive legislation.

Some municipal leaders believe they can. Pittsburgh City Paper spoke with a handful of mayors and city councilors from across the country at the NLC conference in Pittsburgh last week to assess their feelings about the incoming GOP-dominated government. Municipal leaders think cities should unite with each other and focus on working for their residents. Meanwhile, experts believe that cities, suburban and rural areas can find common ground. But each of these strategies is contingent on the whims of the federal and state governments, which can be slow to act. 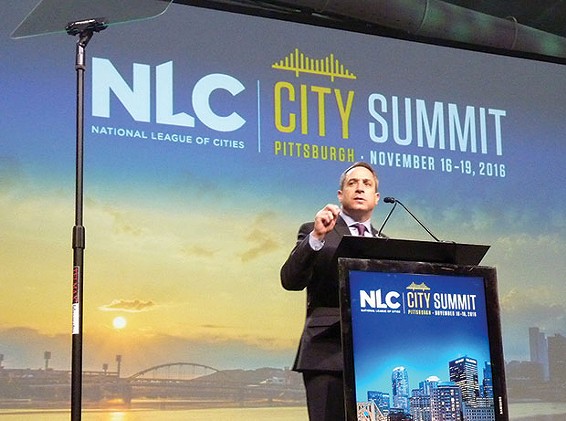 The National League of Cities is a consortium of 19,000 cities, towns and villages across the U.S. that lobbies the federal government on their behalf. While the group represents many big cities, incoming NLC President Matt Zone, who spoke to CP at the NLC conference, said the majority of its organization’s members hail from smaller towns.

Some of these members expressed concern about the incoming Trump administration in interviews with CP, including Kathy Ehley, mayor of Wauwatosa, Wis. (a Milwaukee suburb). “We are wondering [about the future],” she said. “We don’t know what’s going to happen. It’s unsettling.”

Chris Roberts, mayor of Shoreline, Wash. (a suburb north of Seattle), believes the federal government could cut off funding for a light-rail extension to his town. “I’m worried, worried that the administration will not invest in public transit,” said Roberts.

Trump spoke during the campaign about supporting public transportation, but Senate Majority Leader Mitch McConnell (R-Kentucky) has said infrastructure spending is low on the list of Senate priorities.

Zack Reed, a city councilor from Cleveland, is also anxious that his large city district will not see the help it needs. (Reed’s district, which CP visited during the RNC, is filled with blight and is one of the poorer districts in Cleveland). “Trump said he would go into the inner city and give us change,” said Reed. “Is he going to step up?”

But of all the city leaders CP spoke with, none were as worried about President-elect Trump as they were about a GOP-controlled Congress. And some cities are even more worried about attacks from their own state legislatures.

Over the last several years, for instance, the GOP-controlled Pennsylvania assembly has sponsored bills to limit governing in cities and towns. In 2014, a law allowing the National Rifle Association to sue local municipalities over gun-control efforts passed It was struck down in court, but thanks to a technicality, the law is now back in the assembly. For several years, state Republican legislators have worked to prevent cities from passing legislation aimed at helping undocumented immigrants. And state Rep. Daryl Metcalfe (R-Cranberry) once said tax dollars shouldn’t go to cities that “promote immoral behaviors” in response to a Philadelphia marketing appeal to gay tourists.

All this worries Peduto. He spoke to CP on Nov. 9, and said it’s going to be harder for cities to pass progressively minded laws for the next two years. “It’s going to be much more difficult, just to be blunt about it,” he said. “There have been a lot of bills in the state trying to limit the role of municipalities, but Gov. Wolf has been protective. Now with a veto-proof [state] senate, that is also under question.”

And Pennsylvania is not alone in this situation. North Carolina famously passed a law this year prohibiting local municipalities from expanding protections to the LGBT community. Zone, of the NLC, said it’s discouraging when state governments overrule cities when local governments are merely trying to accommodate their residents.

“It’s frustrating for those of us serving in local government when we are pre-empted by state government or the federal government,” said Zone, who is also a Cleveland city councilor. “If a local government enacts a law that doesn’t conflict with state or federal law, they should be allowed and empowered to do that.”