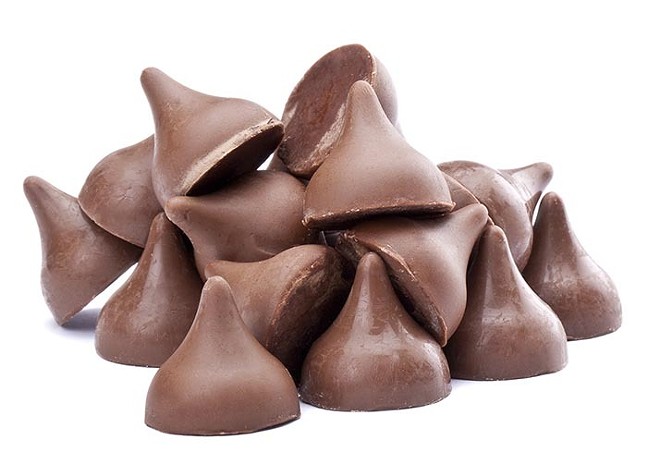 To build civic engagement, eight students and a Bucks County middle school teacher are pushing for Pennsylvania to pick its newest state symbol — the Hershey’s Kiss, as the official state candy.

“Denoting the [Hershey’s] Kiss as the state candy will not only bring more attention to our state but also commemorate a company and candy that has forever impacted our state’s economy and values,” Mehaffie, whose district includes Hershey, wrote in the memo.

But the effort did not start with Mehaffie, but instead in a classroom more than 100 miles away from his district.

In an email, Richard Loughran, a 50-year old history teacher at Newtown Middle School who chairs the school’s social studies department, said he started the lobbying push as a way to help his students understand and engage in the governing process.

“In a time when civic involvement is so crucial, the value of showing kids they can be involved, have a voice, and make an impact, however small, is vital,” Loughran said in an email. Such experience, he added, is “necessary to have a more successful democracy.”

The group of students has moved out of Loughran’s class — they are now high schoolers — but agreed to form a committee to push the Kiss.

They’ve built a website and social media pages for their effort, branded as “The Kiss 4 PA,” and have posted about meeting with three lawmakers as well as representatives from Hershey in the past year.

The candy, first made in 1907, became a hit because the Hershey company could mass produce — and mass wrap — it by machine, not by hand, in its factory about 12 miles from Harrisburg.

Since then, production has expanded across the globe, and the company has changed the foil color and introduced new flavors to match the seasons, although the teardrop shape and small tissue paper tag have remained constant. According to the company, 70 million Kisses are still made in Pennsylvania every day.

A handful of states honor their local desserts, from whoopie pies in Maine to Jell-o in Utah. But among Pennsylvania’s 16 state symbols,  which includes a state locomotive — steam and electric — a state firearm, and a state fossil, just one honors something edible: The official state beverage, milk.

But the Kisses, Loughran said, would make a smart addition because it showcases the state’s deep connections to manufacturing and the dairy industry.

To lead the effort in the state Legislature, Loughran and his students reached out to Mehaffie, whose district includes Hershey.

But the Kiss could face some sweet, sweet competition from other noted commonwealth confectioneries.

According to a 2021 report by the National Confectioners Associations, the candy industry’s lobbying group, Pennsylvania’s candy industry is the third-largest in the country, behind California and Illinois. The group has 51 members in Pennsylvania.

Among the potential competitors to be the state’s honorary treat are Peeps, which are made in Bethlehem in the Lehigh Valley by the company Just Born Quality Confections. These multi-colored puffed up marshmallows, shaped like baby birds, bunnies, and other animals, have been a staple of spring since 1953. Just Born also makes the fruit candy capsules Mike and Ike.

“I don’t want to take anything away from Hershey Kisses, but there are a lot of wonderful candy makers in Pennsylvania,” state Rep. Steve Samuelson (D-Northampton) whose district includes Just Born, told the Capital-Star.

Pennsylvania is also home to Dunmore-based Gertrude Hawk Chocolates, known for its  frequent appearance in youth fundraising catalogs, and Altoona-based Boyer Candy, which makes the Clark Bar, a chocolate coated bar of peanut butter and toffee, and the Mallo Cup, a chocolate cup with marshmallow filling.

Picking just one of the company’s offerings would be like picking a favorite child, he added; though “you can’t beat Dark Mallo Cups.”

Finally, there is Souderton-based Asher’s Chocolate Co., a brand of gourmet candies and chocolate coated treats frequently found on the shelves leading up to the HomeGoods check out counter. Also, the brand just so happens to be owned by long time Republican power player Bob Asher, who has poured millions of dollars into GOP political efforts.

Still, Loughran expressed his confidence that the Kiss’s long history and iconic shape would win out.

“Although I am sure some of the legislators will try and support a particular candy that is created within their district or by their specific constituency, we are trying to pass a state symbol not a local symbol,” Loughran said. “Hershey cannot be reasonably debated in that regard.”

For his part, Mehaffie hoped the effort could be a bridge for lawmakers to come together and work through the legislative process as intended, while teaching the students how to engage in government.

“We’re quick to react rather than go through a process,” Mehaffie said. “We’ve missed that for the last decade or two.”

However, there is some recent precedent for honorary legislation to divide the Legislature, rather than unite it. Between 2017 and 2019, the Pennsylvania House and Senate, both run by Republicans, feuded over which salamander should be named the official state amphibian.

Students rallied behind the Eastern Hellbender, saying the endangered species deserved the honor to highlight the state’s water quality.

But then-House Majority Leader Dave Reed (R-Indiana) offered legislation to name the Wehrle’s salamander as the state amphibian. It is named after the naturalist who discovered it, who was a native of Reed’s Western Pennsylvania district.

The students then had to engage in a lobbying campaign to push the hellbender over the finish line, handing out cookies and stickers honoring the cause, before the state bestowed the Eastern Hellbender with the honor in 2019.

Still, at the time, a few lawmakers dissented, grumbling that the effort was a distraction from more important issues facing the state.

“I think our time should be spent on issues like eliminating school property taxes and a balanced, no new taxes budget, not on what the state amphibian should be,” state Rep. Jerry Knowles (R-Schulykill) told the Capital-Star at the time.

For his part, Loughran said he thought the students were prepared for what lay ahead, no matter how long and challenging it may be.

“I believe this unique experience will provide a tremendous opportunity to help the students learn and grow in ways that a textbook or a classroom experience just cannot mimic,” Loughran said.


Stephen Caruso is a reporter for the Pennsylvania Capital-Star, where this story first appeared.