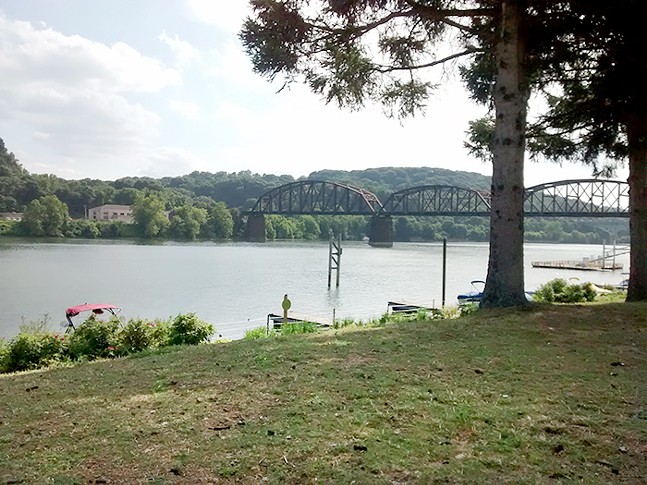 CP photo: Abbie Adams
View of Brilliant Branch Railroad Bridge from Aspinwall Riverfront Park
There is a four-mile abandoned rail corridor that connects Pittsburgh's East End to Aspinwall across the Allegheny River. Pittsburghers have probably spotted it while driving down Washington Boulevard, where the elevated tracks can be viewed from the road. For years, it has been a dream of urban planners and cyclists to convert the old rail corridor into a bike trail, in hopes of providing a car-free path from eastern Pittsburgh to the Allegheny River communities, and beyond.

Now, there is a chance to make that dream a reality. According to the Aspinwall Riverfront Park, the Allegheny Valley Railroad has agreed to sell the rail corridor to the ARP. And the park group is applying for stimulus funding to purchase the corridor, which is known as the Brilliant Line or the Brilliant Branch.

"This is a once in a lifetime opportunity to connect our communities, improve the environment, create safe recreational trails for all to enjoy," reads the ARP website.

If purchased and developed, the corridor could be converted into a trail that will run from the Aspinwall Riverfront Park to Hamilton Avenue in Homewood, according to advocacy group Bike Pittsburgh. That would then connect to potential future trails the ARP hopes to create to connect to the Waterworks Mall and, even potentially the Sharspurg/Etna trail, which is still a work in progress.


Imagine not having to bike across the Highland Park Bridge (or maybe even the 62nd St Bridge) anymore. Show your support for using stimulus $ to buy the Brilliant Line for a bike trail from Homewood to Aspinwall. https://t.co/M4pxBe8XFm

If the Brilliant Line were completed, and the Sharpsburg/Etna trail finished, then there would be a bike trail connection running from Homewood, across the Allegheny River, and then down the river connecting to the dozens of miles of trails that run along the Allegheny, Ohio and Monongahela rivers. This would also provide a car-free trail from Homewood to Downtown Pittsburgh and the North Shore.

ARP is hoping to compile letters and testimonials of support for the Brilliant Line, which they then plan to send to U.S. Rep. Conor Lamb (D-Mt. Lebanon) and the Congressional Transportation Committee. Interested parties can fill out testimonials on APR's website.