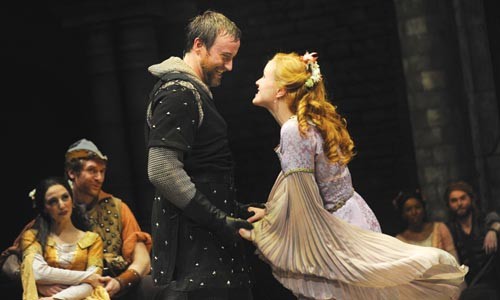 Reading Pittsburgh Public Theater artistic director's Ted Pappas' program notes about Camelot's original bumpy road to Broadway, you'll understand why the show never became what it might have been. And indeed, in his own skillful, visually impressive conception, Pappas admirably delivers the work's gleaming surface and dark shadows -- yet still fails to overcome the challenges in Alan Jay Lerner's flawed script.

Hayden Tee gives a superb portrayal of King Arthur. The costumes look magnificent and the singing honors the best of Frederick Loewe's good music and Lerner's exceptional lyrics. But Camelot remains as unwieldy as a bad suit of armor: too many gratuitous songs in time and space better spent developing the story. A more consistent playing style could make this work better.

Lerner spun his script off The Once and Future King, T.H. White's remarkable version of King Arthur tales. White explored legends, seeing hopes for an ideal future corrupted by human nature and incipient evil, and heroic characters trapped by destiny. Lerner likewise aims for thought-provoking substance. And he does hint at the seeds of destruction in Arthur's bastard son Mordred; subtly imply the foolish ways of the past in overtly comic King Pellinore; and suggest the pitfalls of pride in Lancelot's clay feet. But these are only fragments.

Lerner sets up conditions which need careful handling to maintain any aura of seriousness. Should the main characters first appear sweetly real, despite the fantasy elements, we can emotionally connect with them. Indeed, as Arthur, Tee gets that entirely right: earnestly innocent, totally human. But Kimberly Burns' Guenevere looks so shallow and dippy that she has nowhere serious to go. And while Keith Hines starts by making Lancelot warmly charming, the knight later becomes a statue instead of a person. If Tee's final scenes are emotionally moving, Guenevere and Lancelot suggest bystanders, not victims.

While Don DiGiuglio overplays the pivotal role of Mordred, Alex Coleman makes a vivid brief appearance as Merlyn, and Daisy Hobbs sings magnificently as the marginal Nimue. Lerner's error: The latter two parts could have been cut to give the script time to go deeper. A re-write is not possible, but Pappas could have done more to make the best of what's there.